Twitter about to monetize; First Lady supports keeping kids away from too much use of electronics and media 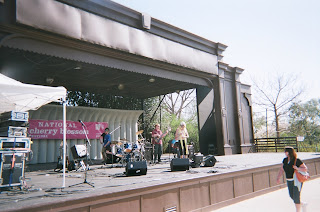 So, Twitter is “finally” going to monetize, with Best Buy, Sony Pictures (eg, Columbia) and Virgin America appearing on top of search results, but apparently only in response to searches. The McClatchy-Tribune story is here.  Later the facility will expand with other clients, displaying among tweets.


And the Library of Congress is going to index (from) all possible tweets, whose numbers would be like the number of stars in the Milky Way. Maybe it’s looking for alien life.

Tory Johnson’s Job Club has already explained how people with large Twitter followings can monetize with the help of companies like “Sponsored Tweets”. The ABC story is here.

Here’s another aside: the President and his wife don’t allow their daughters to use any cell phones or computers, or even watch television, during the week.  (I remember that command from teachers in seventh grade, back in 1955: "Read, don't watch television!")  And Michelle talked about the problems of “gossipy behavior” among kids on social networking sites.
Posted by Bill Boushka at 2:43 AM