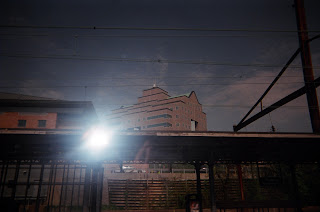 A New Jersey middle school principal, Kenneth Orsini, of Benjamin Franklin Middle School in RidgeWood, New Jersey, has sent a letter asking parents to keep all middle school students in his school off social networking sites at home and not to allow kids to have computers in their rooms, at least with wireless or other Internet access.

Orsini was tripped off by “Formspring” (link) which apparently allows kids to make anonymous comments about one another, somewhat in the spirit of "people rating" sites discussed earlier on this blog (in conjunction with the workplace).

North Jersey offered the article by Leslie Brody and Evonne Coutrous, “Ridgewood principal to parents: Get your kids off Facebook” link here

Orsini admits that the good kids and parents (many individually able to handle the responsibilities of Internet use at home at young ages) are being asked to “sacrifice” for order of everyone. It only takes a few kids to engage in cyberbullying or defamation to create enormous disruption for the entire school, even from computers off campus and at home.

Orsini hinted that gay-bashing and body-image issues were particularly pernicious on the Internet among some younger teens.

Ironically, the article says, Orsini is a member of Facebook.

Tweens don't have the resilience to stand up to online name calling, he says, which is a much bigger problem than bullying inthe physical world (especially probably for girls).

There is an ethical question: if use of social networking sites doesn't produce a tangible benefit at this age and presents an unbounded risk that can interfere with others' doing their job (finishing school) then it could be banned.

A cover story on p 5 of the Sunday May 2 Washington Examiner "Region's schools, parents try to rein in bullying" by Leah Fabel and David Sherfinski", reports that in Montgomery County MD at Lakelands Park Middle School, two students were arrrested for making Facebook threats (presumably from home computers) with theFacebook  moniker "Ur Worst Enemy".

The front page of the New York Times today has a story by Tamar Lewin, "Teenage Insults, Scrawled on the Web, not Walls", about anonymous grafitti on Formspring, link here.  People can link a Formspring account to a Facebook or Twitter account and invite anonymous comments. Users can ignore anonymous questions, but most tweens seem unaware of this option. Formspring has about 28 million visitors a month.
Posted by Bill Boushka at 6:44 PM