A visit to Va Tech; some reflections on my own "unbalanced personality" 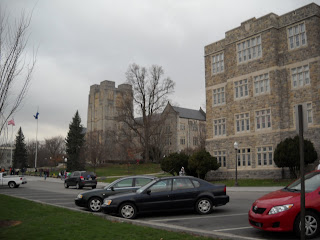 I did pay a visit to the Va Tech campus earlier this week; the last time I had been there was Dec. 1996. It’s difficult to stop people and ask about history, but one student said that the tragedy happened in the “castle-like” building. Apparently that’s a structure adjacent to or connected to the main Burruss Hall.


I thought I would share a much more personal thought than in the posting Wednesday, building on to what I wrote Sunday March 21. That is, I am never willing to let anyone “cling” to me as if I were a “role model” or if doing so would “hide” the person’s responsibility for his or her own issues, given the rejections I faced as a youth and then the loss of normal socializing experience in the college years. I won’t create a phony “relationship” with someone in order to manipulate them with my persona, rather than by dealing with the facts or “right and wrong”.

That means I won’t allow a “relationship” with another family member determine what my own objectives should be, if that relationship isn’t voluntary. But it was also relevant when I was substitute teaching. I don’t let others “connect” to me (Avatar-style) the way other do, as an “authority figure” in a social order. Sometimes that creates issues in maintaining classroom discipline.

I could get into the Rosenfels area and say that all this goes with a “subjective feminine” (and “unbalanced”) personality. Or it could be related to Asperger’s or even the “schizoid personality”, where there is an aversion to social relationships imposed by others, particularly in the family unit. Sometimes intrusive demands from others (especially in a family) and provoke anger. It’s a good question whether any of these factors contributed to Cho’s mental illness and the 2007 tragedy.

One can ponder how this fits into arguments about the “natural family”. The individual likes me finds that some social relationships are demanded of others even when one was childless and did not “procreate” responsibility.
Posted by Bill Boushka at 11:39 AM