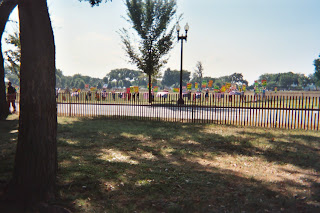 The Supreme Court said Monday March 8 that it will take a case of a family of a veteran who sued an “anti-gay group” for picketing the veteran’s funeral, claiming that deaths in battle resulted from the military’s allowing gays to serve starting in 1993 (as God’s “punishment”; even the Taliban would have trouble coming up with this – remember some of the comments by Pat Robertson and Jerry Falwell, especially after 9/11). This does deserve a “sic” indeed: it’s odd to hear the “don’t ask don’t tell” policy referred to as permissive.

The legal issue will be whether the free speech provision First Amendment outtrumps the right to religious observance and to be left alone during such an observance, even in a public place. The Kansas City Star republished the AP story by Mark Sherman here. A lower court had awarded damages to the father of a Marine from Maryland who had died in Iraq, but an appeals court (the 4th Circuit in Richmond VA, generally somewhat "conservative") had ruled that the “church’s” speech, however tasteless, was protected by the First Amendment and has some connection to political debate, however far-fetched. The case is Snyder v. Phelps. Another version of the story appears in “Democratic Underground” here, referring to details in the Washington Post.

NBC Nightly News led off with this story Monday March 8.

You could also visit “Baptist Watch” (link) for more on Fred Phelps and the Westboro Baptist Church in Topeka KS, at one time presented in a report on 20-20 by John Stossel!

Robert Barnes has another free-speech story at the bottom of p A3 of the Washington Post, "Bankruptcy law doesn't restrict free speech, Supreme Court says", link here. The case is Milvatez, Gallop & Milvatez P.A. v. United States. It concerns a federal law that prohibits an attorney from telling a client contemplating bankruptcy to take on more debt. But the law can be interpreted reasonably, as for example allowing advice on refinancing. Barnes also has an A3-page story on the Phelps case.
Posted by Bill Boushka at 6:19 PM