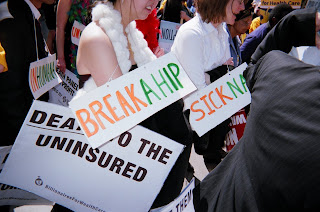 On Friday, March 19, David Brooks has an interesting op-ed on p A23 of The New York Times, called “The Broken Society,” link here. Brooks starts out by mentioning the libertarian and socially neutral positions of the Tea Party movement and moves on to discuss British writer Phillip Blond, who believes that “revolutions” from both the left and right produced a society that pays lip-service to freedom but that actually invites more supervision by the “corporate state” of shadow government. The change in social mores, partly motivated by the Civil Rights movement given the history of race relations and then moving into gender areas, tended to weaken family ties while promoting individualism (leading to a libertarian-style way to implement what we call “gay rights”). Then “market fundamentalism”, with ideology from the Right (particularly Reaganism) led, through deregulation, to excessive concentration of corporate power and eventually the recklessness that led to the Collapse of 2008. This was sometimes good for the consumer (because of technological revolution and the Internet) but often bad, as health care and education costs skyrocketed, and as consumers were lured into debt. The end result can be, at the individual or family level, a “Darwinian” attitude which can leave people in the cold and invite dangerous political counter-currents, even terrorism.

Blond wants to implement some ideas that seem to restructure the notions of conservatism and liberalism: (1) “relocalize the economy” (2) “remoralize the market” and (3) “recapitalize the poor”. In some ways these might undermine our modern ideas of individual sovereignty and force people more into direct answerability to family and local communities in their actions.

Blond has often written in “The New Statesman” and his philosophy has been summed up as the “Red Tory” thesis, with a discussion here by Jonathan Derbyshire.

The other day, while on a day trip, I saw a piece by a North Carolina physician, Ada M. Fisher, in the Washington Times (Wed. March 17 p A2) “Reinventing conservatism” column, “Socialism American style”, link here. The piece examines the health care debate (and to some extent eldercare policy) in the matrix of “personal responsibility” (and avoidance of anti-selection) that expresses some reductionism that seems a bit shocking. It could take us down a dark path. For example, Fisher (a physician) ignores the idea that having kids involves some genetic or congenital uncertainty (even in marriage), and if everybody was absolutely accountable for their own kids only, no one could afford to take the "chance" in having children!
Posted by Bill Boushka at 6:51 PM

Speaking of which, here's something I picked up today that I figure might be of some use to you: http://www.pressdisplay.com/pressdisplay/showlink.aspx?bookmarkid=TNCRSBFLM756&preview=article&linkid=91699acd-4eb3-41f3-8225-51aa086f6421&pdaffid=ZVFwBG5jk4Kvl9OaBJc5%2bg%3d%3d

This kind of information is very limited on internet. Nice to find the post related to my searching criteria. Your updated and informative post will be appreciated by blog loving people.