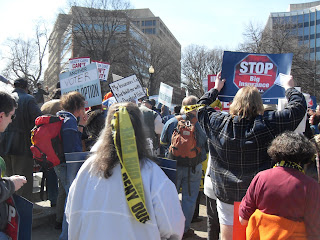 The New Republic (at one time, Andrew Sullivan’s province) ran an important essay by Lawrence Lessig on Jan. 26, 2010: “For the Love of Culture: Googe, copyright, and our future,” link here.

He starts out by discussing the attempt of Grace Guggenheim to make a documentary film as a compendium of her father’s documentary library. She soon ran into enormous problems of getting permission to use clips from older films or broadcasts, which (unlike the practice of quoting under “fair use” in authoring books) requires explicit permission for each separate quote. Lessig goes on to discuss how the film and television industry has lawyers who make a living getting these permissions, and then moves on to discuss Google’s book project, which he suggests could run into legal paradigm problems that would take digital libraries into the area of “documentary film” (as far as permissions management) rather than “books”.

I can see how this could come about if I look at the way I built up my "/photo" directory at doaskdotell.com to demonstrate what kind of film I could try to make. Should "fair use" allow others to lift one or two of my photos or clips?

He suggests some innovations in copyright law to balance interests properly with digital media. One is to require authors to register their works to gain copyright protection. Another is a much shorter period before digital copying is allowed. Another is a real hard look at the paradigm itself. Radio (via Orson Welles), television, and the Internet have similarities but also differences.

The cultural problems come from the different ways different individuals and companies make their livings in media. Established authors and artists benefit from a strict copyright system whose complexity infringes (pun) on the mechanics of low cost competition from the newbies.