Snow! How to watch the power outages (from a laptop, with wireless) 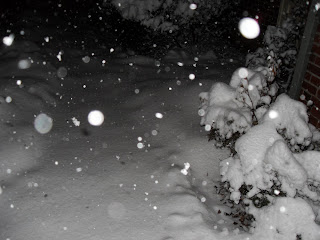 I grew up in Arlington VA, and I do recall some memorable nor’easters, including Inauguration day in 1961, the Blizzard of 66, the March 1993 Blizzard (for about two hours, the most violent I have ever seen here), the 1996 blizzards (January 6-8, and a similar storm Feb. 6 went about 50 miles further south and pounded southern Md and Tidewater VA), the Dec 2009 blizzard, and not snowpocalypse today. Is this “The Day After Tomorrow”?

The Weather channel predicts a wintry mix until 2 AM, with heavy accumulations not starting until then, whereas Doug Hill at WJLA says that will stay further south, and the real heavy accumulations and thunderstorms with snow will start around 10 PM. So far, it’s about 4 inches. Not that much. But other areas have about 8 already. Hardest hit will be the Blue Ridge, and then Annapolis East, across the Delmarva to Deleware and extreme southern New Jersey. Rehoboth Beach could wind up with the full three feet accumulations jackpot.

The greatest danger is long power outages, if they overwhelm the system after unexpected freezing rain or heavy wet snow sticking to trees and power lines. That’s not good in the winter. They say laptop computers are OK down to 50 deg. F. But right here, by my observation, the snow is already turning finer and drier. Hopefully we’ve dodged the worst. We got a break in the middle of the day when the streets were too warm for the snow to stick for a few hours.

You can follow the Dominion Power outgages on this map. The power outages in northern VA have increased markedly since 7 PM, and there were some around Charlottesville. There is a large outage around Great Falls, VA according to the map (one of the worst areas for overgrown trees). Virginia may be spared somewhat because a lot of the weakest trees were "sacrificed" in 2003 to Hurricane Isabel, which caused enormous disuption with only 40 mph winds sustained for 12 hours. Dominion Power whined that Isabel tore through the region like a "giant washing machine."

My experience was that both Dallas and Minneapolis had much more stable power grids (than the DC area) when I lived there. It makes sense -- fewer trees. I know a little bit about the utilities in Dallas because of a job interview one time with the utilites (and a visit to a nuclear power plan in Glen Rose).

Are these bigger storms the result of climate change? Maybe. I’ve never heard of an El Nino that increased snow. But the biggest snows here result when high pressure to the north dams cold air against up the mountains, and drives the low pressure systems to the south and east, often resulting in even heavier show in Richmond and even down to Williamsburg. With Appalachian cold air damming, low pressure systems tend to “jump” to the Atlantic (potentially tapping on the Gulf Stream for energy) rather than go up the Ohio valley (as they tend to do earlier in the winter). This kind of pattern is more common in late winter, in February and early March, which is why in many years the biggest snows come late here. February, not January, is usually the worst month hear and typically has the annual low.

I spent six years in Minneapolis, 1997-2003, and the biggest snows were in late February 2001 (when Watertown SD got 32 inches), and March 2002. Typically a “Southern” storm like this happens there once a year, around the first day of spring. But most of their snows were small and dry clippers, and caused little trouble. It’s ironic to have bigger snows here, in a milder climate. 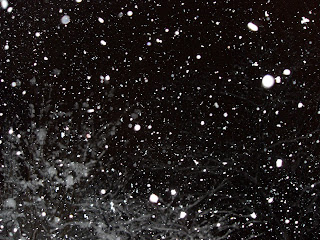 Update: 9:30 PM (while Smallville plays "Absolute Justice", a fantasy of Chairman Mao). The Bing weather channel map shows that the freezing rain reached almost to Alexandria around 8:30 PM and then got pushed back south by a "cold front". There appears to be strong avection and lift and thunderstorm activity along I-64 SE of Charlottesville, which may explain the outages there. The "cold front" will keep pushing south toward Richmond.

The wind is picking up, about 20 mph, almost due east. The wind is helping blow some snow off the tree limbs and lines. That may be good. Hopefully the snow will become drier and fluffier pretty soon is the "cold front" is passing.

Bing shows a lot of freezing rain in the valleys of the Ridge and Valley Province in W Va, just east of the Eastern Continental Divide. That sounds like big trouble for power companies there. This time, it's colder in the East and warmer in the mountains, if that make any sense, with cold air damming.