Today's debate on "don't ask don't tell" and the 60s debate on draft deferments: an odd moral connection: why repealing DADT redeems me 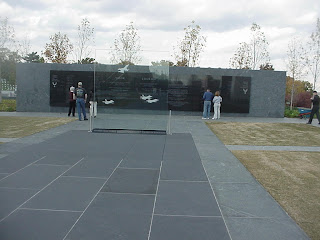 While some momentum seem to grow to repeal the “don’t ask don’t tell” and allow gays to serve (somewhat, at least) openly in the US military, it’s well to review another moral debate from four decades ago, the Vietnam era draft with all the controversy about deferments.

In fact, from the late 1940s until the mid 1960s, married men were sometimes deferred, and sometimes only married men with children were deferred. In early 1963 the term “Kennedy fathers” was coined to characterize married men in genuine relationships to their children, who then had III-A deferments. The fatherhood and marriage deferments got wiped out by Johnson in 1965 as Vietnam escalated. However, student deferments remained, and changed the character of the debate. (Male) math and science majors with good grades in college and graduate school were the “safest” from conscription. The rationale was that we needed “brainpower” to defend ourselves in the Cold War. Suddenly, society had a new quasi-hero, the nerd. Deferments would finally be replaced by a lottery in 1969, and Nixon would end the draft in 1973. Congress and the president, however, have always had the authority to restore it (and there have been some minor changes, such as in 1980 when the Soviet Union had invaded Afghanistan). Selective service still operates today, and men in certain age ranges are still required to register.

In fact, right after 9/11, there was talk from some people, such has Democratic Senator Carl Levin (MI) , New York Representative Rangel, and DADT author Charles Moskos, that we should restore the draft. At the same time, Moskos was starting to argue the DADT should be repealed, and in general proponents of conscription or even mandatory national service have favored ending “don’t ask don’t tell.”

It’s well to mention here that in 1981 the Supreme Court had valided the constitutional permissibility of the male-only draft, in Rokster v. Goldberg (text). In the modern world of individualism, it seems strange that the state could require men to offer themselves as potential sacrifice for the good of all. And that only men had to do this. But remember, not only was the “complementarity” of the sexes regarded with more “reverence” in earlier times, women had taken their own share of the common risk merely by undergoing childbirth. At one time, men outlived women.

Of course, some nations with conscription, namely Israel, require women to serve, and if a draft were ever reinstated in the U.S., it would probably incorporate women, too.

Once in the Army, men with college educations fared better and were less likely to wind up in combat, at least during the Vietnam years. Men who enlisted for three years or more were given some choice of MOS, and I was told by a recruiter in 1967 that “95%” of draftees got infantry. There was a slogan, “choice, not chance, in today’s Army.”

My own story becomes relevant and prescient. My expulsion from William and Mary in November 1961 for admitting homosexuality (covered here Nov. 28, 2006) was, according to the cultural and “moral” standards of that era, a cause for great shame, or perhaps an extension of shame from teenage years for not being “competitive” enough as a male. One part of my plan to redeem myself was military service. I “volunteered” for the draft physical in 1964, 1966, and 1967, and was rated 4-F, 1-Y, and finally 1-A. By 1966, the draft paperwork had stopped “asking” about “homosexual tendencies”, and by the mid 1960s there was, in effect, an unofficial “don’t ask don’t tell” policy. After finishing graduate school, I “volunteered” for the draft and then went in 2 weeks early as a two-year enlistee (at age 24). I had an RA number, “RA1937256” (I still remember it from all the BCT formations – it’s long term memory). I guess I fell into the lucky 5%. In the MOS session, the master sergeant in charge said, “hey, you missed a college grad”. I wound up with the MOS of “01E20” which was Mathematician. But I was a dud at the start of Basic, and after a few days in the infirmary with the flu, I got recycled through Special Training (Tent City at Fort Jackson). My PCPT went from 190 to 357 before I graduated from Basic in 14 weeks. (I even remember the PCPT: low crawl, horizontal ladder, run dodge and jump, and mile run).

What strikes me about all this is that our society, in fighting Communism in the Cold War, thought nothing of estimating the “value” of one young man’s life compared to someone else’s. Supposedly we had won World War II in order to put down this kind of thinking, that one person could be officially regarded as more “worthy” than another, and compel another’s “sacrifice.” In my case, the whole draft deferment system seemed almost anti-Darwinian. Someone less fit for service could let someone else put himself in the line of sacrifice. In more authoritarian thinking setups, this could be seen as a moral outrage. In the "McCarthyism"-infected world of my coming of age (which still strikes me as having endured some lingering fascism), physical cowardice was seen as one of the worst moral deficits: if you didn't step up when called for the common good, someone else would take the hit in your place.

All of this background helps explain why I would view a repeal of “don’t ask don’t tell” as a personal vindication.
Posted by Bill Boushka at 6:21 PM