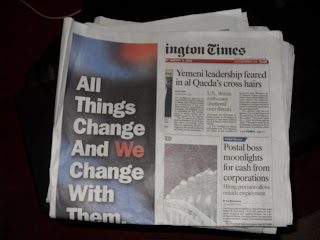 Well, The Washington Times has fulfilled its New Years Resolutions, with a $1.00 hardcopy paper that has no local or sports section (no one cares that the Redskins fired Jim Zorn). It actually hired new management while laying off 40% of its news staff. And the stack of papers at an Arlington 7-11 at noon Monday was not moving at that price.

The Times has an excellent article on the Culture page, B5 (in the Commentary Section), “Checkbook Journalism: TV news still facing ethics issue”, link here.

Obviously media sources aren’t supposed to “pay for news”; nevertheless, it seems as though recent “accidental celebrities” Jasper Schuringa and David Goldman benefited from their adventures.

Jasper Schuringa, after tackling the terror suspect on the plane about to land in Detroit, with his hand burned, still got off some cell phone photos of the suspect. ABC and CNN both paid for photos, which they say is not paying for an interview. Not that Jasper should not be rewarded for his acts, but it seems as if the networks walked into areas of gray here. No doubt some movie directors must wonder if he can act; imagine him as having a part in CWTV’s “Smallville”.

This reminds me of the issue of bloggers getting “paid” to promote products, which the FTC is forcing bloggers to disclose; it even reminds me of past controversies over whether blog entries could be considered indirect “campaign contributions”.

The New York Times ((another “Times” and big brother!) also addresses the issue of even paying expenses for freelances in a column on the Opinion page 8 Sunday in “The Public Editor” by Clark Hoyt, “Times Standards: Staffers or Not”, link here. The article discusses three major freelancers, all major professionals, who no longer write for the paper for violating company rules on accepting money at all. Hoyt writes “These cases illustrate how hard it is for The Times to ensure that freelancers, who contribute a substantial portion of the paper’s content, abide by ethics guidelines that editors believe are self-evident and essential to the paper’s credibility but that writers sometimes don’t think about, or don’t think apply to their circumstances, or believe are unfair or unrealistic. Some writers do not read the guidelines carefully, and although they are encouraged to raise possible conflicts of interest with an editor, some don’t tell and are not asked.”

Where I think there could be an ethical problem is with publishing opinion pieces submitted by people in management on their own initiative, until there is an agreement by the manager’s employer that submission is appropriate and is naturally part of the person’s job. Likewise, it can be inappropriate for a manager to blog on his own about anything remotely related to the work of people he or she supervises, without oversight from the employer.

A distantly related incident occurred on CNN with a story on Popeater by Ron Shulter, "Kathy Griffin Banned From CNN", link here.

As an aside, you may want to check David Carr’s piece in “Week in Review” in the New York Times, Jan. 3, “Why Twitter Will Endure: So you’re drowning in a sea of information; perhaps he answer is more information”, link here. Twitter, unless Facebook and Myspace, doesn’t expect “reciprocity.” Twitter is the ultimate example of “algorithmic authority.”
Posted by Bill Boushka at 10:52 AM