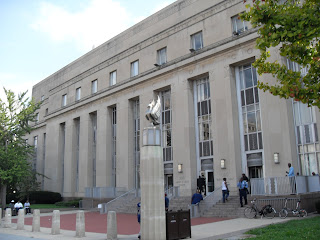 Jury duty has always been a civic obligation, which could disrupt a person’s livelihood, to the point that many employers would cover it. That was the case more me: I got called to jury duty four times in Dallas in the 1980s (with the one day, one trial system) and was foreman once.

But asking jurors to remain mum on the Internet while on jury duty seems too much to ask. Check out the Metro story “Social networking among jurors is trying judges’ patience,” by Del Quentin Wilber, the Washington Post, Saturday Jan. 9, here, mostly about cases in Maryland. Convictions have been overturned or at least challenged after jurors admitting doing “research” on the Internet (even just looking up words on Wikipedida), or when several jurors “friended” each other on Facebook and chatted about the case, potentially “bullying” other jurors to go along.

In the most sensitive cases in the physical world, jurors can be sequested in hotels, and kept away from newspapers and media, including the Internet.

Attorneys could research a juror’s “online reputation”, especially blog postings, to look for prejudices that might affect a verdict in a case; but it’s unclear where appeals courts would consider such post mortem material seriously,
Posted by Bill Boushka at 6:01 AM