If "we're at war", then a lot of free expression could be up for grabs 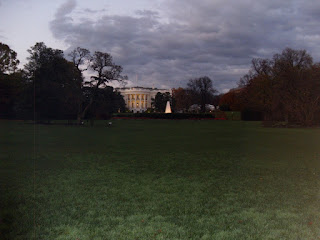 When I turned on the news Sunday morning on NBC, I kept hearing that president is “absolutely certain” that the Christmas Day Incident in Detroit was part of a terror plot connected to Yemen and probably Somalia, and that he would meet with all of his advisors to consider emergency steps Tuesday when he returns to Washington. A huge tragedy was avoided by an ineffective device and by a particular passenger (who may present a certain political irony). This is certainly alarming for civil liberties on several fronts.

Let’s put a couple things in perspectives: the Incident would not have occurred had the suspect been re-screened properly in Amsterdam (where I have flown to and from several times). It’s hard to understand how a passenger was allowed to board an international flight to the United States and be screened only in a third world country (particularly after paying cash). Simply improving screening at European or Asian plane changes would do a lot to improve security without imposing on civil liberties.

The alarm this morning was augmented by announcements that the United States and Britain would close their embassies in Yemen because of specific threats, but later reports indicated that these closures would be temporary.

We’ve all heard a lot of reports about passenger management in flight (the pillow issue) and the probable increased use of body scanners. We’ve heard a lot about the failure of intelligence to connect the dots, especially when the suspect’s father, a businessman living in London with moderate beliefs, talked to authorities about his son (a tip that reminds one of the Kaczynski case.

And we hear a lot about comparisons to other incidents, including Ft. Hood.

But the most disturbing comment is that ordinary Americans need to realize “we’re at war.” Cheney, remember, just before Christmas, had criticized the president for downplaying the importance of this “war.”

It’s the “war” word that can provide a rationale for all kinds of restrictions on civil liberties, going beyond airline passengers. Ironically, on the first Sunday that the shrinking Washington Times does not print a paper, the conservative paper ran a hard-hitting editorial “A Decade of Decline: Barbarians at the gates in 2000-2009”, by Jeffrey T. Kuhner, link here.

It’s true that the Bush administration did not ask Americans (outside of those “volunteers” already in uniform who got treated with multiple deployments and “stop-loss” policies ) to “sacrifice”, but it’s inevitable that this kind of talk will reoccur, with issues like national service and possible conscription (as was discussed in 2001, ironically by Charles Moskos, originally one of the authors of “don’t ask don’t tell” back in 1993).

Another issue is the “gratuitous” Internet, so critical to business models now, that can serve as an easy tool for “steganography”, or a trick called the “dead drop”. There’s an article at ABC Australia from 2005 with Roger Clarke at Chet Hosner about how it works, link that makes comments as to whether your could “ban” steganography, but that also makes the point that it’s already “illegal” in most western countries for terrorists to plot attacks, on the Web or anywhere; it’s detecting them that is difficult. Here’s is an excellent discussion offered by Georgia Tech of a Los Alamos article by Donovan Artz, “Digital Steganography: Hiding Data Within Data”, (and “the data beneath the wax”) link (pdf) here. There was a lot of discussion of this possibility after 2001. In April 2002, an online essay of mine about 9/11 was hacked and overlaid with bizarre characters in a section where I talked about nuclear weapons.

In fact, a few years ago, there was a lot of attention from NGO’s on accounting for loose nuclear materials, some of it led by former Senator Sam Nunn with the “Nuclear Threat Initiative”. Recently, the Washington Times has presented some op-eds about the danger of small nuclear devices launched off shore by rogue elements (from Iran or North Korea as well as Al Qaeda) for the EMP effect, or even the development of microwave weapons for this purpose, discussed in Popular Science one week before 9/11 in 2001, and the subject of recent media reports about experiments carried out on Aberdeen Proving Grounds in 2001.

The media has also made a lot of the use of the Internet to recruit young men to radical Islam. Most of these sites are hosted outside the United States, but trying to regulate the content of sites in the United States would run into the constitutional objection to any censorship solely based on explicit content, as we know from COPA. That leaves open the idea of regulation distribution, dealing with issues like free entry, free content models and possibly mandatory insurance, as has been noted here before.

Note that he says Al Qeada in Yemen encourages would-be jihadists to "do it yourself" with instructions from the Internet. Although most of these sites (as I noted) are overseas and would violate TOS of major western service providers, this sounds like an existential attack on the "free entry" along with free speech model of the Internet itself. Anyone notice this?


The world seems even more dangerous today than it was in 2001.
Posted by Bill Boushka at 10:40 AM