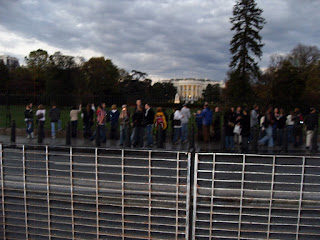 A Virginia couple, Tareq and Michaele Salahi, trying to get on the upcoming show "The Real Housewives of Washington" got into the expanded state dinner at the White House Nov. 24 even though they were not on the list as invited guests.

The interesting thing is that their ruse was discovered when they posted their pictures on Facebook. People associated with the Bravo cable network said they believed that the couple had legitimate invitations.

The dinner was so big as to require a special tent to be built, and had a vegetarian meal, for the prime minister of India (including the "chick peas" from "Cold Souls" (aka "Old Souls"!) .

Is this like the “balloon boy” case in Colorado, where a couple or persons seek easy fame?

No one knows yet how the couple got past layers of security, but lying to the Secret Service, even without an oath, can be a felony.

After first having some trouble because of misspelling in some news stories, I found the pictures on Facebook, here.

I did a little maintenance on my own account, adding my domain. I haven’t used it much yet, but that will soon pretty soon as I get more into trying to agent my screenplay “projects”.

But remember, Facebook can be very public. But that’s what some people want. Remember, at one time Facebook was limiteds to college and high school campuses, and it was originally intended to be used in a "quasi-private" or conversational manner, with privacy settings. Now it is a really effective broadcast.


Here's a Showhype link to the Facebook photos story.
Posted by Bill Boushka at 7:13 PM