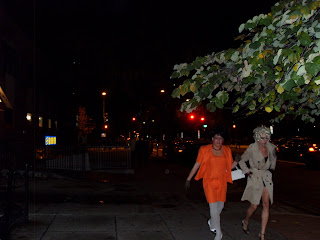 Today, as I took in the hymn “For all the Saints” by Ralph Vaughn Williams, the “All Saints Day” after some people on Washington’s 17th Street didn’t quite survive Halloween, I remembered a vague argument made last week in the health care debate, about mandatory insurance – to the effect that people are likely to comply if they believe that doing so will follow a “social norm” – even if doing so doesn’t compute according to economic self interest.

But the “social norms” argument somewhat overlooks the role of individualism and the kind of thinking that has become the norm for our culture for the past few decades. True, there are new social norms, especially “speech codes” about what you can’t say – and as John Stossel showed last spring (“You can’t talk about that”), even these get very hard to pin down.

Back in the 50s, the family unit, as well as larger encapsulations of church and country, did provide people with mindset – of norms about where the right place for your head to be was. You learned to perform as an individual, as in school or on the athletic field, but you learned to be part of the group in order to continue on your family and your culture – the so called “hidden curriculum” that many of us did not get (partly because it invokes a gratuitous emotional space, rather familiar in soap operas). Marriage (and parenting within marriage) was put on a pedestal (enforced by familiar codes of Vatican sexual morality letting marriage monopolize sexuality) so that married couples had enough incentive to remain stable and active (and to get formed in the first place). It's important to realize that, in this view, "family values" works because of a common belief that everyone will honor the authority of the family, that everyone is a stakeholder in family regardless of individualized "choices".

But even as early as the late 50s, the time of both Sputnik and Ayn Rand’s “Atlas Shrugged”, the idea of the autonomy of the individual began to become more important. A great irony of modern democratic civilization is that a family-centered system was probably a necessary prerequisite for modern individualism to develop. (Yup, I’ve seen plenty of columnists in The Washington Times say things like this!)

There really is quite a clash of world views here, that reaches deeply into personal levels. Some people feel that true “freedom” only is possible when the family becomes an intermediary for people to learn compassion and caring; others feel that freedom requires absolute fidelity to the law of karma and “personal responsibility” -- and acceptance of the consequences of the application of Logic. Of course, you can "define" personal responsibility in terms of ability to provide for others beside the self (and including intergenerational responsibility within the family, whether "chosen" by procreation or not). “Love” and “Law” overlap but sometimes can contradict each other.

The debate over homosexuals in the military in 1993 erupted as a microcosm of this dichotomy. “An Army of One” is, after all, the ultimate oxymoron. Now the same tension lives in society as a whole with the way we use the Internet. Is it for socialization, or is it for self-promotion and fame? Well, it’s both and there’s a rub. You can get famous by stepping on toes and avoiding the social mess of others – and they will eventually say the only point of your speech is to incite or entice them unless you take on the same responsibilities that they do. We’re now only beginning to grasp the nature of this kind of problem with social media. Ponder again, what a “don’t ask don’t tell” society really comprises. Bill Clinton, without quite understanding what he was doing, did open Pandora’s Box in 1993, but it would blow itself open anyway soon.
Posted by Bill Boushka at 2:22 PM