Is "too much knowledge" anti-faith? I say, see around those corners! 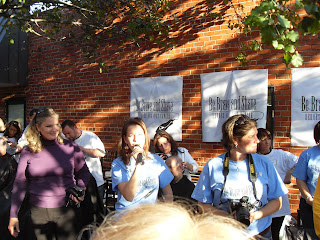 Today, Sunday afternoon, the Westover Market in Arlington VA held a “Be Brave and Shave: Heroes Against Cancer” benefit for the Children’s National Medical Center. Okay, these were head shaves, and I’m bald anyway. Frankly, because of some occurrences during my upbringing, I became very sensitive about my body as a boy, and rather unwilling to share even superficial (even non-living) “body parts” for charity. Some of these things are just too intimate. I play the “introvert advantage”, preferring to know what I’m doing before I jump in. If dropping by and snapping a picture seems voyeuristic, so be it. One can make the donation and not get shaved.

The media has had fun with this kind of thing, on reality shows. Let’s get beyond Allison Sweeney (“Samantha”) and “Biggest Loser” and recall Troy McClain who, in an early episode of Donald Trump’s “The Apprentice” let his legs get waxed for the sake of “The Team”. But for me, the vestiges of 1950s style shame is real. Once, when substitute teaching, I was ambushed by a request to don swimming trunks (at age 61) in front of the kids and man the deep end of the pool. I refused.

Okay, you say to me, "get off your high horse," give up those expressive, self-indulgent psychological defenses, and go back to real life. And I just photograph the experience in my mind, ready to write it up later, maybe in a movie screenplay.

That brings me to something else – related to introversion, perhaps. I like the accumulation of knowledge, sometimes gratuitously, sometimes, it seems, for its own sake. That theme kept coming in my high school education in the late 50s (graduating in 1961), as I explained in a posting on Sept. 14, 2007 here. The history teacher taught us to see the way issues like segregation could affect our “karma”, an math teachers (especially in plane geometry, as I remember) taught the value of sophistry and learning for its own sake. Today, education helps people learn to see around corners (as Dr. Phil often points out , although biological brain maturity is part of this). Suze Orman and her smackdowns on personal finance provides a good example: nobody needs to fall for the “because everyone else does it” trap and get into financial trouble with unsustainable financial behavior (like taking out unsound mortgages). Education, particularly math, helps people see the cumulative effect of savings and debt, both. In other areas, the same ideas apply. Computer literacy helps parents as well as teens recognize scams and predators. That sort of learning is a little bit like learning to drive a car: realizing that some kinds of mistakes can have long-lasting, grave consequences.

A lot of knowledge on the Internet has been “self-published” for free or for relatively little compensation by “amateurs”. A lot is written these days about whether this development undermines conventional “professional” newspaper and broadcast journalism. But the quality of the volumes of material on sources like Wikipedia and many personal sites keeps improving (with only modest additional constraints, such as those implemented recently by Wikipedia). And, as I’ve pointed out, a lot more could be done to give individuals the ability to “connect the dots”, enough to change the whole flavor of political debate and change, taking it away from lobbyists paid by special interests and giving it back to ordinary people. Blogging and social networking has, in some measure, become a new tool for direct democracy.

But a knowledge-based society presumes that individuals will keep up with “knowledge” in order to take care of themselves, and, depending on their past choices, their own families. A lot of this knowledge will make the well-informed better prepared for changes that come (as it did before; “introverts” were often better prepared to deal with a more entrepreneurial job market as it started to evolved in the late 1980s). Some of it is novel and subtle, such as the awareness of the problems concerning “online reputation” that have evolved during the era of social media. Some knowledge that gets out there, however, seems gratuitous. I know, I make postings about the (hypothetical) dangers of an asymmetric EMP attack or of a huge East Coast tsunami from the Cumbre Vieja volcano in the Atlantic. There’s not much the average citizen can do about this sort of “duck and cover” scare talk (remember the “Atomic Café”?) Or is there? Talk about H5N1 (as opposed to H1N1) or even Ebola virus is scary, but with determination we can really get our politicians and medical industries geared up to deal with it before it disrupts our whole way of life. Or how about careful calculation of just how much mileage we can get out of clean energy initiatives to forestall adverse climate change (which not everyone sees as catastrophic).

Particularly since 9/11, followed by the global warming debate and financial crisis, we’ve come to understand that a lot of learning is really about “skills” – the Boy Scouts “be prepared” dictum, to be able to survive unpredictable externally imposed calamities. Of course, I say, we should be better prepared to prevent them (that goes for 9/11 and the neglect of the Bush administration). Here’s one of the critical points in the fulcrum of learning: realizing how a lot of what we have can depend on the unseen and involuntary sacrifices of others on the other side of our planet. A good comprehension of that by everyone (getting back to the high school history teacher) can help prevent these calamities in the first place.

Okay, we come town to another “Apprentice” dichotomy – “book smarts” vs. “street smarts”. As I found out with my own personal experience with the Vietnam era draft, military service, and deferments, a lot of people see social injustice as inherent with “too much education” (I remember a drill sergeant saying just that). People “in the masses” see “book learning” as a way to “get out of things.” The “class” resentment can run really deep. Pretty soon this runs into certain interpretations of Christianity (and similar beliefs in other faiths, including Islam). That is, the world is not about “you” (Rick Warren’s message), it’s about your whole community. Deep understanding of the outside world is not for us (it’s the Knowledge of Good and Evil); it keeps us away from Love and from needing salvation. And I come back and say, why can’t you have your cake and eat it too? How can it be wrong to have the wisdom to make sensible decisions and avoid foolish risks?

We can pose these conundrums in several ways. We can talk about “deep justice” – making sure everybody “does his part” and make that a fundamental moral issue as it was a few decades ago. Or we can, as Rick Warren would, pose it in terms of a community or family, not the individual. We can talk about changing the “rules of engagement”, and suddenly some people find out that it is their turn to become “second class citizens” – and face the religious idea that the political idea of “class” or “personal merit” is wrongheaded anyway (it is anti-Faith).

One of the biggest ways the rules change is that things are not just about making choices that avoid unwanted responsibility. If everyone is going to have to accept some intergenerational responsibility at a very personal level (because of sustainability problems), the way we think about “personal responsibility” and “family values” will turn on its head. But that won’t make the need for “the Knowledge of Good and Evil” to go away. If I did have my own kids, I’d want them to have that knowledge, so they could see around corners, all the way back to “passing Go”. 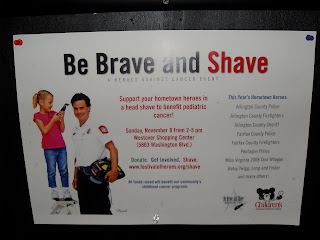