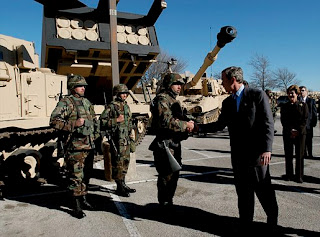 Of course, the news on the incident at Fort Hood, Texas today keeps rolling in, but MSNBC has an important story, just posted a little before 9 PM EST on Nov 5, to the effect that Major Nidal Malik Hasan had attracted the attention of authorities with Internet postings of an “existential” nature about six months ago. The MSNBC story has web link here and was featured for Dell/MSN users this evening (often the default IE site for new Dell computers). The story describes more graphically the disturbing content allegedly included in the posts. Apparently investigators are still trying confirm that Hasan actually wrote the postings.

The MSNBC story had used information on the “blogging” issue on an AP story here. Curiously, the AP story would not load into IE without disabling popup blocker. The story indicates that Hasan had expressed opposition to American deployments overseas, had performance evaluation issues, and was, most curiously of all, single with no children.

Blogging by military personnel from overseas, usually on military computers, has been controversial (even if a valuable source of battlefield journalism) and is prohibited or reviewed in some commands as a security matter. But stateside it is obviously done a lot (from personnel's own personal computers, usually). But blog content could come to the attention of military commanders. For example, it could be used as “credible evidence” to “enforce” the “don’t ask don’t tell” policy.

Here's a bit of a coincidence: the morning Washington Post today (Nov. 5) had covered a hard-hitting inside story about a Pentagon report about widespread concerns about unfitness of today's recruits (covered on my "Issues" blog earlier today; see Profile).

Curiously, MSNBC also greeted visitors tonight with a story about the rapid fall of Myspace (so often a favorite topic on Dr. Phil), to the point that its future is threatened; it has really lost ground to Facebook, Twitter, and other more upscale social media. The link for that story is here.

Wikipedia attribution link for p.d. picture of President George W. Bush visiting Fort Hood, not too far from Bush’s ranch. I was last in the general area in June 2005.

Here is an apparent link to Hasan's blog, this link on Scribd. Another blogger ("Director Blue" aka Doug Ross) offers an image of the post on his posting here, with some references to President Bush's "My Pet Goat" moment on 9/11. There will be a lot of discussion of Hasan's background in Islam. But I have personally met several people who, born in the Middle East, left Islam and came to the US.
Posted by Bill Boushka at 6:29 PM