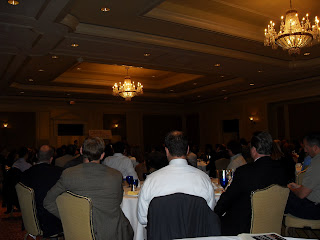 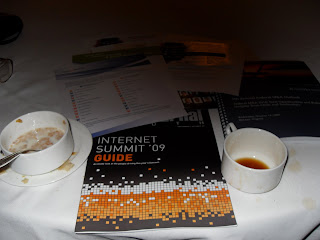 First, however, there was an amusing sideshow. The huge ballroom was partitioned, and next door there was a “5th Annual Federal M&A Outlook”. Somehow I and a few others got directed into there, where there was only a continental breakfast, but the discussions, about acquiring tech companies, sounded like they belonged in our seminar. It wasn’t until the discussions moved to the credit markets, TARP, bailouts, etc. that I looked at the brochure and realized, well, I had the wrong breakfast. So I had a freebie on the Ritz. I found the right room.

The panelists included Robit Bhargava, founder of the 360 Digital Group at Oglivy; Shonali Burke, Adam Lehman, at Lotame; Goeff Livingston, at SVT and author of “Now Is Gone”; and Jake Mass, at Living Sherman; and Paul Sherman of Potomac Tech Wire.

Early discussion were upbeat. There was description of SusTech (link “Every answer has a problem”) and its professional social networking on SharePoint (link) as giving the ability to automate postings on multiple sites .

Conversely, the idea of using Facebook apps as a way to manage one’s experience with other major sites was discussed, as many commercial sites now have handles with Facebook and Twitter (not so much Myspace). But some celebrities have major presence on both Myspace and Facebook. (Look at Ashton Kutcher’s blog on volunteerism here).

The recent controversy, often mentioned by the President, over the relatively poor performance of the US in bandwidth capacity compared to Japan and South Korea, was mentioned as a cause for the slow development of virtual reality on the Web. (Remember those complete bodysuits for VR shown in Omni Magazine in the 1990s?)

The practice of "curator journalism" was mentioned. That term sometimes refers to news aggregation on sites like Mixx, or on blogs like mine, where many stories are presented with the writer adding commentary to "connect the dots."

The recent implementation of FTC rules to require bloggers receiving "payola" payments from companies to disclose these payments or face bank audits and fines was mentioned; in the UK, bloggers violating this rule can actually go to jail.

But the “nebulosity” of privacy was mentioned as a future major problem for the Web. There is a concern that the legal environment (such as pressures to weaken Section 230 protections) could undermine the business models of all but the largest social media and publishing services, giving the companies that remain arbitrary power over users (with the way they administer anti-spam policies, for example). Privacy was discussed as a growing concern in certain blog areas like medicine or nursing, and finance. For example, blogs about medical cases should never mention individual patients by name (or identifiable traits) without permission, and HIPAA rules might come into play. Amateurs blogging about these areas might unwittingly mention or refer to other patients, violating privacy law. The risks to privacy become existential and prospective, as discussed on the floor after I asked a question (which also mentioned "reputation defense").

One speaker downplayed the importance of search engines in looking at this issue, and said that you should never put anything on the Internet even under privacy settings that would invade privacy or be libelous, because so much "cutting and pasting" occurs. I think we need a new term besides "publication" (which means communication to at least one person who understands the communication, as in e-mails) to "open publication" (which means any one in the general public can see it without identification, a concept which includes most material available to search engines.

In the private networking after the presentations, there was mention of the way the Internet had made the military's "don't ask don't tell" regarding gays unworkable. Nobody understood the public search engine in 1993.

As the cars piled up to exit the Ritz Carlton parking garage, I could hear WETA's playing Schubert's "Little C Major" (Symohony 6,, not so "little") on some car radios; a bumpkin-like, festive conclusion to the event. 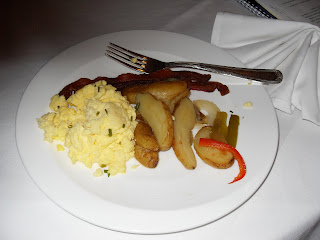 At the end of the session, the hotel brought me the “right”, stick-to-the-ribs bacon and eggs breakfast.

Visitors can check out the “Final Blog Potomac” event here.
Posted by Bill Boushka at 3:02 PM