The Parabe of the Workers in the Vineyard (in October!) 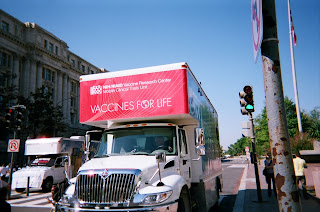 Today, Sunday Oct. 4, 2009 at the Trinity Presbyterian Church in Arlington VA, rev. Bernard Nord preached a sermon “Table Graces” motivated by the Parable of the Workers in the Vineyard, Matthew 20:1-16, where the landowner pays the workers whom he hired at the end of the day as much as those who had worked all day. “No fair.”

The parable expresses a particular “libertarian paradox” inasmuch as the owner says that because of his property rights he can pay his workers as he likes (and violate the usually reliable libertarian notion that people should be paid more or less for the results they get). The property rights are somehow natural fundamental rights (unlike copyright, which leads to another discussion). Yet, rather like “The Donald Trump”, the owner brandishes his rights to say, “hey, life’s unfair. It isn’t about justice after all.”

Yup, we said, “it’s about living in a community.” As Michael Moore points out in his recent documentary, the Gospel commands us to take care of the least among us as we take care of ourselves. The first become last, the last become first. And so it may be in the “next world.”

Yet, when I was growing up, it seemed that the heart of moral thinking seemed to deal with the reality that people, by being different, will in some sense be unequal, both in the need for social (and sometimes sexual) complementarity, and in the need to recognize that in larger areas there will always be gross inequities in both total ability and in inherited circumstances, that “initial place in line”. We see this problem everywhere in history, ranging from how we picked people to be drafted in the past, to affirmative action, to cultural conflicts and resource use differences between the childless and people with families, to (in modern terms) equal rights for women and gays. Sometimes authoritarian (or totalitarian) societies make much of this, making every individual prove his worthiness somehow, often to an ideal set up by the state.

No wonder, then, that Christian grace is about something much deeper than justice as we usually perceive it, even if it sometimes makes deeper justice possible. If everything had to be perfectly just, there could be no real freedom.
Posted by Bill Boushka at 6:15 PM

good work. I also really like this other perspective on the laborers in the vineyard. http://www.lds.org/general-conference/2012/04/the-laborers-in-the-vineyard?lang=eng it something I had never heard before but made complete sense