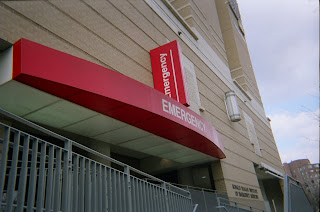 Here comments had been posted in the Washington Post’s blog called “Guest Voices: Other views on faith and its impact on the news” with a title of “Holocaust comes to the ER”, with the article linked in the news story above.

Some of Tamara’s blog entry is quite personal. “I am a first-generation American Jew whose parents and grandparents left Europe before the war that destroyed six million from my historical and biological family tree,” she writes. And the comments about the patient were very general indeed.

Miller, in fact, says that she did not disclose anything that had not been already published widely in the media. But the hospital says she violated HIPAA and hospital policy by saying anything at all.

Some of the charges made by the hospital include “talking to the media” without permission. Hers was not a personal blog. So the punishment is something like what could follow an “improper” letter to an editor of a newspaper; this could have happened in the days before the Internet.

But the incident backs up what was said at Potomac Tech Wire Wednesday: hospital or medical employees (as with employees in other fields like finance and the military) must be very careful about what they say in blogs and should never identify people, even indirectly, without permission.
Posted by Bill Boushka at 4:23 PM

The real issue here is not patient confidentiality, which was a pretext. What Rabbi Miller was really fired for was complaining about gender-based salary discrimination.

Read more about Rabbi Miller's firing, watch video, check out other articles, and sign our petition to have her reinstated at www.newsericks.com/physician-heal-thyself.