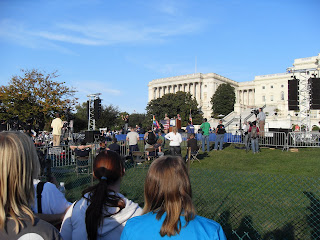 The October 17, 2009 issue of Family Circle has an excellent article by Pamela Kramer, “Share Tactics”, on p. 74. I’m not able to find the article online yet.

The article discusses the practical dangers that families can face because of kids’ disclosures online, particularly on social networking sites and now through Twitter. The article does mention the role of search engines in the issue, along as the possibility of submitting deletions of search results (through submitting deletion requests) such as is done by services like Reputation Defender.

But the most important point is that information spreads by happenstance acquaintance or “coincidence” much more often than people realize. Therefore, it can be dangerous for a kid, in good faith, to disclose that one of his parents is looking for another job. Even when names and addresses are not identified, circumstances identify a person or family more easily than one thinks; and there are plenty of databrokers willing to sell supposedly unlisted information about families or people tentatively identified.

Kramer hits the nail on the head with this core explanation. Kids “have grown up with a culture of online sharing…Sound counterintuitive? Not to them: opening up to others—even if it’s not through face-to-face interaction—creates a feeling of closeness. But what kids don’t consider is your standard of privacy.” Got it. Parents are likely to live in a world that is more sensitive to family-centered or group-centered “reputation” than kids do; many jobs, especially in sales, for example, are very “reputation sensitive.” Yet, the software companies that run these sites were often designed by older teens and young adults who happened to live in an individualistic culture not as sensitive to “accidental reputation” as “the real world” is. I suspect that Facebook founder Mark Zuckerberg is surprised, in retrospect, how much social controversy (as with employer “background checks”) his innovation created.

Social culture, and the varying perceptions of the “meaning” of family responsibility, as noted on previous posts, seems to live at the existential heart of this problem. Posts seen as political irony by a speaker might be taken as contempt or troublemaking by readers in more "collective" cultures.

For now, I have to recommend going out an purchasing a hardcopy of this Family Circle issue, which belongs to Parents Mag.
Posted by Bill Boushka at 4:13 PM