False accusations against teachers are still a "big problem" 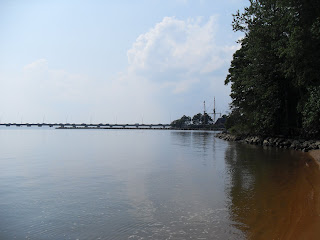 This morning (Oct. 22), ABC “Good Morning America” ran an important story about a 26 year old female high school teacher (in Kentucky) who was acquitted of charges of improper contact with a 16 year old male student in her apartment. The teacher and student had traded hundreds of text messages, but the teacher insists that a high volume of texts is common in her own use, and the telecommunications company had deleted the messages (mysteriously). Apparently the student had “stolen” the cell phone at one point, but was never disciplined by the school system. The detailed story by Lee Farran and Sarah Netter appears here. Despite the acquittal, the teacher’s career as a teacher may be over because of the (possibly unfounded) accusations, and the teacher now works in banking; the headline says that the teacher's life was "ruined". The prosecutor had offered a plea bargain without s.o. registry, but the teacher insisted on a fair trial and “won.”

In 2003, LionsGate and Lifetime made a film called “Student Seduction” in which a female chemistry teacher is accused after a high school student uses force on her, although in the film the teacher has unwisely socialized with the student before the incident. In 2004 I wrote and (in early 2005) posted a fictitious screenplay short called “The Sub” in which a gay male substitute teacher is set up and “somewhat falsely” accused and sent to prison (to die there) by a precocious male music student (after the student had saved the sub’s life by using a defibrillator). The publication of the screenplay would eventually provoke an “incident” in October 2005, which I detail in a posting here on July 27, 2007.

Media reports of improper behavior by teachers seems to have increased markedly since 2005, perhaps because of Chris Hansen’s notorious series on NBC Dateline. It is quite likely that some or many of them are unfounded. On occasion, a student (perhaps because of bad grades. Most likely a female) will try to set up a teacher (most likely a male; most of these incidents are heterosexual); this is something that definitely happens somewhere in the U.S. occasionally. This seems to become a serious practical risk of entering teaching.
Posted by Bill Boushka at 11:06 AM

Labels: my history as a substitute teacher

I've been accused recently of touching and looking at breast.
All are false.