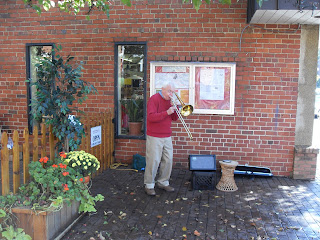 Over the past few years, I, like many bloggers, have become increasingly concerned about the topic of “online reputation”, and particularly the issue of “implicit content”, the notion that an online posting, while acceptable use by ordinary reckoning (or terms of service provisions), might be misread by others (especially employers or clients or other personal stakeholders) as implying some kind of troubling future intention or propensity.

I haven’t really done this with my own blogs, but imagine tagging all the entries in the blogs with, when applicable, the following labels: (A) personally sensitive issue (B) contains personal narrative.

Examples of personally sensitive issues would be pretty clear: race, religion, political affiliation, disability status, sexual orientation, nationality, and certain items in debate that lend themselves to insensitive observations, such as in today’s health care debate. Future debates about eldercare are likely to fall into this area, such as “demographic winter”, filial responsibility, and means testing. Most likely bigtime international issues, especially those connected to terrorism, fall into this area.

Then it’s pretty clear what issues remain, the gradually “impersonal” problems. The best examples of these are probably Internet security and identity theft prevention, network neutrality, copyright law (including the DMCA), trademark law and patent law (including the prospective dilution concept), and censorship (like the COPA case). But the more technical areas of finance (including retirement financial issues such as social security and Medicare, 401(k)’s and defined benefit pension issues) and tax law (IRS rules) fall into this area, as do techniques for trading in securities markets. Environmental issues (global warming, strip mining) generally fall into this category.

Before Web 2.0 and social networking sites and social media came along (more or less by 2005), I had written that people who get paid to make decisions about others (generally that means people who have direct reports in a conventional workplace) should not blog in an unsupervised fashion (skipping the due diligence and financial results expectations that used to limit what “got published”) within the purview of search engines. One of the biggest concerns was the possibility of triggering a hostile workplace situation, posing an unbounded legal risk for the employer. I thought of it as a distribution issue; once you allowed use of the “free entry” mechanism to distribute original content, then you faced content censorship (and pre-publication review) if you wanted to contain the risk. “Matrix managers” (team leaders without direct reports or end user client company associates who supervise outside contractors only [and no internal employees]) did not present the same level of risk (that is, presumably much less!), and nor did individual contributors, although when staffing firms send consultants to clients, the staffing firms might become concerned if clients find controversial writings by the contractors online. Generally, companies have handled the “blogging policy” issue by saying that when people speak online on their own with their own resources, they must clearly identify their views as their own and not necessarily that of their employers. But that might not preclude serious risks of hostile workplace issues in some situations.

But knowledge, while “dot-connected” (as I have written in the past, when discussing the “opposing viewpoints” paradigm) is kind of like federalism. Some areas (like Internet security) are usually well-addressed separately (like issues that are “left to the states”). There is no reason why a manager, say in an ordinary financial institution’s IT department, could create problems if he or she blogged about Internet security products on personal computers (except that she would not be permitted to discuss her own employer’s confidential security practices).

Category (B) comes into play if a posting relates a personal incident (not previously published in “establishment media”), or even if it relates personal knowledge of a professional or previous workplace matter not otherwise known to the public. Typically people write blog postings describing wrongful things that they believe were done or that affected them personally and adversely in institutions or workplaces, or in families. Sometimes they relate only to legitimate “professional” workplace issues: for example, how a mainframe shop at a specific company, named in a blog, handled security or elevations ten years ago compared to how the same issues would be handled today. The problem is prospective: a stakeholder can become, with some legitimacy, concerned that the blogger has a “propensity” (a word known from the military “don’t ask don’t tell”) to disclose quasi-private information after believing that a particular workplace or other business arrangement has been closed or terminated. But one way to handle this sort of problem (as I wrote here on May 30) is to construct a “business privacy agreement” with stakeholders, promising to consult them before writing about them at some unspecified time in the future, and to honor all confidentiality requirements (trade secrets, HIPAA, etc.) as normally understood.

Under (B) it is possible for a blogger to post new material (not previously published and attributed with a link) that is not “personal”. For example, a blogger could report on oral arguments before the Supreme Court, or on an anti-war demonstration, without placing the posting in (B).

Remember, Web 2.0 services were devised with the notion that people could network with various levels of privacy settings, outside of the scope of search engines. The purpose was supposed to be directly social rather than to “get published.” Of all the services, Facebook may be the most flexible. Generally, these concerns would not affect “legitimate” social networking on sites like Facebook and LinkedIn, as long as the person did not disclose business confidences (which can be repeated by others even when not accessible to search engines).

Generally speaking, book, movie or music reviews as on some of my other blogs do not contain personal or “sensitive” material, but sometimes I have added personal anecdotes to a few of them, and a few of them (especially documentaries) address touchy subjects.

Although I do not foresee employment that would throw me into this kind of “conflict of interest” problem in the immediate future, eventually I may have to segment my own content this way. For example, in preparing to agent my own screenplays in the future, I might find it necessary to behave differently on the web. Were I to wind up in a "professional" situation where I could no longer comment publicly on touchy issues (like "don't ask don't tell") in open and searchable public spaces, it would be difficult for me, for at least a while, to remain "politically active" with credibility, given my own history. Sometimes you really do need "organizations" and conventional politics.

Content labeling software (based on “semantic Web” architecture), developed largely for giving parents the ability to protect kids (with the cooperation of web publishers, with the ICRA) could be expanded to include “privacy and controversy tags” like those discussed here. But the use of these labels or categories could make it easier to provide liability or media perils insurance for bloggers in the future, if that insurance becomes mandatory some day.

Material published in books (even e-books) that must be purchased (and presumably produce auditable financial results), even self-published material, does not lead to this kind of risk when readers must pay a fair market price (rather than "free") to access the material; the pricing mechanism would presumably enforce some protective "due diligence" lacking in today's spontaneous blog posting process.