Should I start a chess blog? 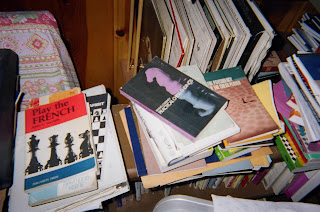 I still subscribe to Chess Life and Review, the USCF (United States Chess Federation) Magazine, since I became a Life Member in 1965, when I was going to GW.

The last rated game that I played was in 2000 in Minnesota, where I won the black side of an Exchange French by conferring mate as the flag fell. I remember getting a good position with White’s lifeless play, winning a pawn, and barely making time in G/30. I had lost the other two games that evening.

I wonder, given all my chaos these days, if I could return. What would I play? I haven’t kept up with the openings. But against the King Pawn, I like the French, because about half the time you get an Exchange Variation, and I think I won every single game with Black in which that was played. You don’t put your rook on the one open file as there are no points of penetration; you put them behind your pawns and storm. Against “3. Nd2” the “Qb6” counteractacks work, but I don’t know where theory is on the Winawer countergambit with 7 Qg4 by White, where Black gets all that counterplay for a pawn. I had only one game in my “career” where Black went in for that, in the Armed Forces Championship at Fort Meade, MD in 1969, and I won that game, in a pawn race.

Against “the Queen Pawn” I suppose the most solid equalizer is the Nimzo Indian. It seems that with a Kings Indian theory is somehow favoring White if theory tries hard enough. With the Benko Gambit, Black now has to deal with the f3 line, which returns the pawn for maybe a slight pull in space.

With the English, I think that a Sicilian Reversed is one of those openings in which the better player wins, even given theoretical equality.

And in Minnesota, I once lost (at Renaissance Fair) to a grandmaster who played the Kingside Fianchetto, set up pawns at e4, d3, c4, and then stormed on the King Side. Of course, there’s nothing in theory; you just have to find the right counterplay over the board.

Theory has become more flexible since the 1960s, when I first started playing in tournaments. In those days, Hans Berliner promoted the idea that the Exchange Variation of the Queens Gambit was practically a forced win for White because of the force pawn structure weakness imposed by the “Minority Attack” (like “Minority Report”). Experience has shown that’s hardly the case. Dogmatism gave way to pragmatism, as grandmasters like Kasparov made defenses like the Tarrasch work.

If I got back into tournaments, I could start a chess games blog. I think I would have to be careful about copyright, in republishing someone else’s analysis, which, although it could be paraphrased, would essentially be like misappropriating a “patentable invention.” But maybe if one used the analysis in one’s own tournament game and then published it, it would be OK. I wonder about the legalities here. Similar comments and concerns could apply to blogs on analysis of other games like Bridge or Go.

But I’ll share one link from my main free site and direct the reader to the comment on the French Winawer "Qd7" (a "different" Poisoned Pawn line), and note White’s innovation by Lothar Schmid, 17 g4! Forcing the win of an exchange in all variations (previously it was thought that White’s Queen was trapped, as in Watson’s book). There are some other occasional opening traps where a Queen is lost (“mated”) before it is directly attacked, sometimes after grabbing pawns on the opponent’s seventh rank.

Here is another chess blog that shows quickly on Bing. Bill Goichberg, who directed tournaments for the Continenal Chess Association for decades, wrote once, that even when playing a 2500-USCF rated player or grand master, only your own mistakes can beat you.
Posted by Bill Boushka at 3:03 PM