September 11, 2009: Looking back, looking forward, with some alarm 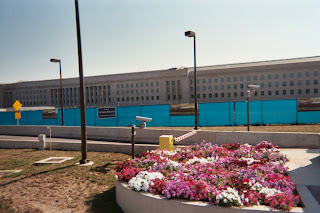 Today, Sept. 11, 2009, is the eighth anniversary of the 9/11 tragedy, a day which, in my life, seems to mark a major challenge to my own faith in individualism. What has happened in the past years has rocked my own moral belief system like a hammock.

In the weeks after 9/11, Americans were taunted by videos from Osama bin Laden, gratuitously shown by the media even as President Bush launched retaliation in early October 2001, that seemed to blame Americans as individuals for the problems around the world. Actually, many experts, such as Peter Bergen, challenge this view. Bin Laden, he says, really is driven by grievances that are expressed in conventional “world history” political and religious terms, a lot having to do with “infidel” presence on sacred Muslim lands.

My whole adult life, however, I’ve been exposed to ideological challenges to individual modernism, ideas that westerners depend upon the hidden sacrifices of others overseas, whether in taking natural resources such as petroleum (an idea playing out in Nigeria now), or labor (cheap labor overseas – the Wal-Mart controversy). We’ve seen extreme proposals to bring about “absolute justice” in such totalitarian movements such as Chairman Mao’s Cultural Revolution in China in the 1960s, where intellectuals were forced to take their turns becoming peasants.

Actually, these ideas were around when I was growing up, in the shadow of the World War II victory against “fascism” that sometimes was followed by exercises in the kind of thinking in America that our “greatest generation” had gone to war and considerable sacrifice to defeat. In fact, “deservedness” seemed to live at the heart of moral thinking in those days – even if that is at some contradiction to the tenets of Christianity.

But some of my concern over the retreat from individualism relates back loosely to what we call “family values”. I’ve discussed this before in terms of “karma” and related it to the challenges posed by “asymmetry” in Internet expressions by individual. But I’m struck by something more fundamental. Our culture used to assume that everyone would remain loyal to his blood “family” and inculcate the public values of married parents. The family, as a community, helped shape identity and the willingness to accept “attachment” from other people outside the obvious consequences of choice (to have children with sexual intercourse, or sometimes by adoption). In earlier eras, it was “family”, with its connectedness to unseen biological and spiritual collective futures (vicarious immortality and lineage), that seemed to give meaning to all personal accomplishment -- as well as to the permanent intimate relationship of the parents. Hyper-individualism would challenge and change all of that, but now radical individualism seems in somewhat of a retreat, because of concerns over sustainability, generativity, and deeper ideas about justice and – yes – karma. This is not the best of times for introverts.

We’ve gotten used to presenting family responsibility as the consequences of voluntary choices (pregnancy), but such a view is incomplete, and carried too far, leads to some behavior that is at least cynical (as Philip Longman and Allan Carlson write), sometimes maybe almost cowardly (a way to "get out of things"). This older view saw everyone as accountable to family – of course sometimes inviting abusive behavior by family heads (the “Stefano” problem of “Days of our Lives”), sometimes to tribalism or even feudalism (and fratricidal wars -- as well to the behavior of the Taliban today), but it could “take care” of everyone, guarantee some sense of worth within the immediate loving family, regardless of what uncertainties of the “outside world” could inflict on any one person. Therefore, even if you didn’t have your own kids, you were responsible for siblings (especially younger ones), under the authority of the sexual life of your parents, not yourself -- you learned attachment and family intimacy and were ready to step in and take care of others, including siblings, their kids, or particularly your parents.

The demographics of eldercare (and fewer kids and fewer wage earners) are forcing this reality back upon us. Many states have “filial responsibility laws” and the current budget crises are likely to lead to their enforcement – and these situations can go way beyond the better known Medicaid giveback problems. People, especially the childless, are likely to come to see responsibility for parents as something that can be comparable to responsibility for kids – something the “sandwich generation” is finding out. There are many particular differences, but there are some overriding similarities. People can be forced to make some of the same sacrifices for parents (in a few states, even siblings) that we think of as necessary for kids – and sometimes it’s actually the law. “Family responsibility” needs rethinking, and the media ought to cover this more candidly. In ways that seems paradoxical, it makes the gay marriage debate even more compelling than the usual arguments about the official benefits of marriage do.

A couple of generations ago, most of the discussions about morality had to do with shared duties, even conscription (remember the days of student deferments?) We ought to understand better how today’s issues map back to much older problems that my generation struggled with. For example, the "don't ask don't tell" issue today compares to the draft and student deferment issue of my own coming of age.
Posted by Bill Boushka at 5:52 PM