The Internet and democracy: self-publication, social networking, and microblogging interact in subtle ways 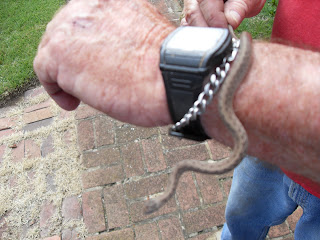 The New York Times “Week in Review” Sunday Sept. 13 has an interesting lead perspective by Annand Giridharadas, “’Athens’ on the Net: Internet democracy is a work in progress: (Don’t text-message your dissent)” with link here.

He talks about the idea that the web, especially modern microblogging and micro-networking tools like Twitter, make it possible for politicians to receive direct input from voters almost immediately. That’s good to the extent that it can bypass even the lobbying groups (and that S word, “special interests”) that try to mobilize voters into “we give you the words” emailing and petition campaigns. The writer doesn’t mention that Athenian democracy was where the concept of ostracism was also born.

The micro-blogging and texting may present a communications technology step beyond social networking as it developed in the 2004-2006 period. It’s well to remember how the social networking paradigm shifted. Zuckerberg (then barely out of his own teens) and his collaborators imagined their tools being used to facilitate networking within relatively organized and culturally homogeneous campus communities. It wasn’t until later that Facebook opened to everybody, as a more cultured and upscale alternative to MySpace, which was winding up on Dr. Phil too often. (Yup, LinkedIn would follow as “strictly professional.”) But then something else happened. Employers started trying to govern how these sites would be used, expecting applicants and associates to present themselves publicly in social conformity with the norms of their businesses. A tool that had represented individualism and freedom could be twisted to demand social conformity (the Chinese carry this kind of thing much further, to be sure). A social networking profile was supposed to constitute a way to meet people, but now it had to remain commensurate with both business and filial purposes. (In this regard, it’s interesting to consider recent litigation in New York where LLDEF won a ruling that characterization of a person as “gay” is not defamatory, although that argument seems to rest on immutability, not on recognizing intellectual and moral subtlety.)

Before 2004 (from about 1998), Internet self-publishing, abetted by the unexpected effectiveness of search engines (and you never really had to pay for placement) really could work as a kind of “passive social networking”, especially effective for “moderate introverts” like myself – writers, artists, musicians, and the like. Along would reasonable “real world” circulation (preferably in a large city, and with some doses of volunteering in the right places), it could help you build of networks of friends and social contacts that you really wanted. It was the “publication” aspect that was helpful to introverts or less gregarious people: they had a chance to show the world what they could do first. Since the Web 2.0 and 3.0 changes with social networking and microblogging and texting, the usefulness of the Web as a tool to “level the playing field” in terms of conventional social competition has actually been somewhat reduced, partly because it is so easy to abuse (the “asymmetry problem”) and because of all the “online reputation” hype. It could be threatened and eliminated altogether, if some “existential” concerns that I have raised in previous posts really came to pass.

The "passive social networking" process, based on "accomplishment" and self-controlled content delivery, raises another philosophical question. In human societies, especially in families and sometimes classrooms, it's important that people be respsected just for being human and having some role within the group or family, not because of a publicly visible accomplishment. Psychologists use the term "attachment" to characterize this process. For some of is, it is a lot more "comfortable" to dismiss attachment and focus on accomplishment, because in certain venues it gets us the interaction we want. But it can run out of steam, and leave people behind.
Posted by Bill Boushka at 1:38 PM