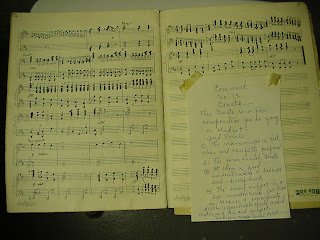 The AP, in a story by Denise LeVoie, reports that a jury has ordered a $675000 judgment against Joel Tenenbaum, of Providence RI, and a graduate student at Boston University, for downloading and distributing thirty songs.

The recording industry has stopped such lawsuits but has pursued litigation that had been previously filed aggressively.

In June a federal jury in Minneapolis had awarded a judgment against Jammie Thomas-Rasset, 32, of 1.92 million, based on 24 songs.

Picture: page from my own piano sonata, composed at age 16.
Posted by Bill Boushka at 5:27 PM