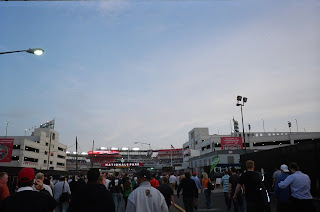 College and major league sports leagues and franchises are now weighing whether bloggers represent a credible “threat” to the financial profitability of their broadcast and video rights. So says a story Aug. 20 on the front page of the New York Times by Ken Belson and Tim Arango. The print title is “with bloggers in the bleachers, leagues see a threat to profits”, link here.

Much of the problem comes from technology that would let bloggers stream play-by-plays live. Maybe it’s not too hard to capture a great outfield catch on video now (yes, I think of Willie Mays in the Polo Grounds in 1954). But major league sports jealousy guards the video rights, and anyone familiar with the MLB and NFL sites knows that a lot of the replay or live video content requires paid subscription.

Big league sports is saying that it doesn’t mind tweets or non-commercial incidental photography. But is a posting of a personally taken photo at a big league game on a website or blog with paid advertising really “commercial”? Technically, yes; but is this plain common sense? I don’t think that ordinary bloggers represent a “credible” financial threat to A-rod. But property rights are property rights … we see the same philosophical and moral debate going on about movies and music. You see the same sorts of questions with movie theaters and commercial legitimate theater (which nearly always ban indoor photography) and museums, which sometimes ban indoor photography. This is the sort of question that comes up in Lessig’s 2006 book “CODE Version 2.0” and probably we need to use the concept of “Commons” here.