The Va-WVa "Ridge and Valley Province": byways of the past, some of it troubled 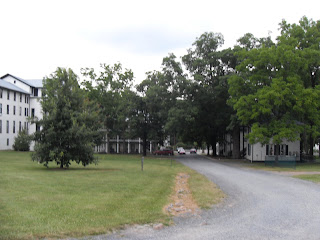 Today, I visited a “haunt” from my past, the Shrine Mont retreat in Orkney Springs, VA, in the Ridge and Valley country between the Shenandoah Valley and the Allegheny Front or Eastern Continental Divide. I had trouble finding the town at first, as it was obscured by a page crease in my Road Atlas, and you have to take exactly the right country road to reach it. The paved roads over the mountains into West Virginia there (like through Wolf Gap) really do go into the boonies. It’s easy to find the wrong one. 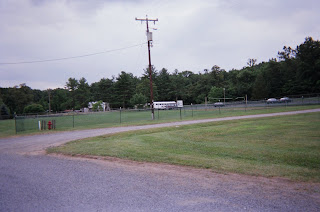 I say haunt, because this was the site of church retreats, usually in June. The property has numerous white buildings and lodges that serve as dorms; it looks like a camper’s version of the Greenbrier. Behind the dorms is the softball field where I hit a legitimate home run in 1969, after Army Basic and some service, then at age 25, in the best shape of my life. But it was the 1962 retreat that I recall, after I had started going to George Washington University and living at home after my William and Mary expulsion, already detailed in these blogs. A few weeks after this retreat I would find myself a “voluntary” patient at the National Institutes of Health, in a “program” for “disturbed” college students. This was the post-Sputnik era, remember, and not everyone realized who Alan Turing had been (or how he had helped win World War II). At the 1962 retreat, I remember that Saturday night the men did a skit about one of the “dorms” called “Peterkins.” At another retreat, around 1966, I remember debates about the morality of the draft and student deferments.

I like to visit the physical locations of various episodes of my life (good, bad, and merely contemplative, rather like this one), only because for me they make a narrative, rather like a movie. The pictures help illustrate an argument, nuanced and perhaps existential, but ultimately necessary. Tomorrow is my 66th birthday, and even though you’re not supposed to give away your DOB online, I don’t think I’m that easy to impersonate or fake. No, I can’t become Benjamin Button and have a 25 year old body again, with the advantage of four more decades of “wisdom”.

Nearby, on the other side of the ridge, is Lost River State Park (but hard to get to from the shrine because the mountain roads don’t go through) in West Virginia, site of a 1990 “Adventuring” retreat on a relatively mild December weekend. That is a happier memory, and I managed to touch base there, too. Also, the town of Wardensville, for lunch; then I drove past various towns and country stores, a few of which I remember from the 1990 trip. Part of W Va Route 259, crossing the Lost River Canyon with some spectacular views, has been widened since the 1990 trip (with at least one "Sideling Hill"-type cut through a mountain). South of the Lost River area, near a town called Broadway, Virginia, there is a miniature Seneca Rocks, standing like a pulled tooth, amazingly only a few feet thick.

Any time you visit your old haunts, you find new wonders. Such is the pleasure of staking out locations for a movie.

Don't worry, the mountaintop removal of strip mining is still about 60 miles away. The coal measures don't start until you cross the Eastern Continental Divide. 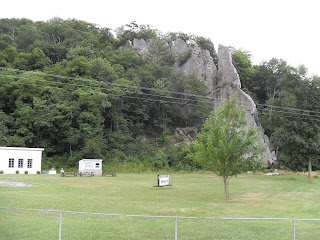