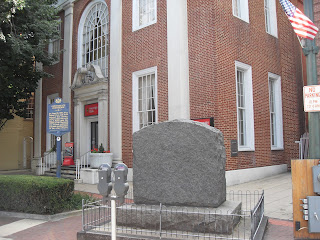 The Washington Post Health Section today (Tuesday July 21 2009) runs an interesting story where some physicians, especially surgeons, are requiring patients to sign contracts that they will not comment about their physicians or treatment in public without permission. The story is by Sandra G. Boodman, and is titled “Doctors Orders: Want treatment: Just sign this no-complaint contract.” The HTML title for the article (here; may require free registration) is “Some patients require patients to sign ‘gag orders’”.

Some doctors say that this is a matter of survival, where reputation (including “online reputation”, as Michael Fertik, founder of the now well known service “Reputation Defender” calls it) means everything. It is simply too easy to post without supervision and without a realistic opportunity for the doctor to reply.

The article mentions a few physicians’ rating sites. Some are freely available to the public, and these include “Rate MD’s” which has the flippant headline “Give your Doctor a checkup!” That site had followed on “Rate My Professors” (both founded by John Swapceinski), and the issue of rating doctors is controversial in some similar and some different way from the issue of rating professors and even public school teachers. Other sites include “Dr. Score” and Vitals (“where doctors are examined”, as if by aliens on a UFO!), "Physician Reports", Health Grades (a $ charge), and “Angie’s List founded by Angie Hicks . RateMD’s does review comments for inappropriate, irrelevant or libelous content and allows doctors to respond.. Angie’s List insists that speakers identify themselves to the site and is open only to subscribers, although many other sites are public. Angie's is adding dentists and some home contractors and plumbers to the service.

There is a site called “Medical Justice” that (in the spirit of “Reputation Defender”) monitors doctors’ online reputations and offers sample “business privacy agreements”. Medical Justice promotes itself as protecting doctors from frivolous malpractice lawsuits.

It’s easy to see how the entrepreneurial spirit of the Web encourages the proliferation of these sites, whether supported by ad revenue, member subscription, or both. It’s also very easy to understand the sympathy for “average” consumers who feel that they have, in the Web, an equalizing weapon with which to hit back and unscrupulous professionals. But the proliferation of these sites can seriously hinder the delivery of important services to people in some kinds of situations, particularly as one expects the proliferation of lists to other areas (like day care centers, maybe even home health), and as other means are available for spreading comments, including blogs and social networking sites, already controversial under the rubric of “online reputation defense”.

That’s why, on May 30 2009, I posted on this blog my own practice, and suggested that many bloggers would need to develop their own “business privacy policies” to reassure people with whom they personally must do business (medical or otherwise) that they will respect confidentiality, privacy, and reputation properly. Otherwise, other professions are likely to develop self-protective "gag orders".

I personally do not comment on “professionals” or other specific parties on blogs or on any of these sites. I do comment on the underlying issues without identifying people (or, when caution is necessary, companies) and I do comment on personal experiences where common sense suggests that now there is no danger (such as with the unusual – and successful – surgery that I had at the University of Minnesota for my acetabular fracture experienced in a convenience store fall in 1998 – notice here I still don’t name the store!)

Reviews of consumer items (like software, computers and games) and of books, movies or plays would not pose the same kind of "risk" but even here a reviewer must be wary of personal comments about performers.

Here is a YouTube video on the "Medical Justice" website, outlining the problem for physicians resulting from misuse of Section 230.


Consumers Union has a link on this problem, here. CU writes "We asked for your thoughts, and you said it was a bad idea. Our doctors here on staff agreed.." One particularly pointed concern is that a patient could be under duress to sign such an order because he or she needs treatment immediately, or even, worse, a relative (like an elderly parent, not just a child) needs treatment oe care immediately; such a contintengy does raise the bar on the ethics of such orders.

Are doctors allowed to do this with Medicare and Medicaid patients? I didn't find an immediate answer. Maybe Congress will take this up!

I suppose that there is a basic tug-of-war here: physicians or other established interests with enormous lifetime investments to get where they are need to protect themselves from "snipes" from people who may believe (perhaps incorrectly) that they have "nothing to lose" See my books blog review for the Scheff-Dozier book reviewed Aug. 27, 2009.
Posted by Bill Boushka at 6:53 AM