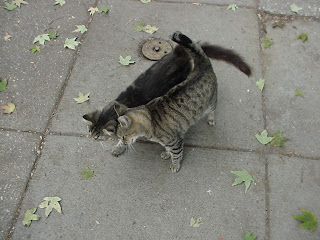 On a lighter note, AOL news is reporting a study from Current Biology, “Cats Do Control Humans.”

Cats in small households learn to get the attention of humans when hungry with an unusual sound combining a purr with a cry. The AOL story is here.

I was “adopted” by a stray unaltered male while living in a Dallas garden apartment in 1979. The cat, Timmy, learned the sound of my car (a Chevette then) and would run to the right apartment and reach for the door knob. Sometimes he would bring birds to the apartment as “offerings.” Inside the apartment, he would hide objects like house keys. At night, if he wanted to go out for biological purposes, he would knead the pillow underneath my head after running into the room. He knew how to communicate and get what he wanted. He would actually play with dogs in the neighborhood.

Despite the debate in the differences between dog and cat intelligence, any mammal that hunts prey for a living has a lot of problem solving ability and can learn to associate with humans. All carnivores are capable of “social cognition” and recognizing that other “mammals” like humans are both similar and different from them but capable both of being a threat or a friend (or, more rarely, a meal). In the South African film “Duma”, a baby male cheetah is raised as a member of the family and actually eats dinner with the family and learns to manipulate a remote TV control. He only recognizes his true nature when taken into the wild and introduced to a female cheetah. 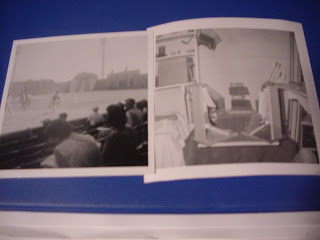 In other "unimportant news", the Washington Nationals fired manager Manny Acta today. The old Senators in the 1950s never had a record after 87 games as bad as this (26-61); I think one year they were 25-55 on July 4. At this rate, they will win only 48 games this year. Their fielding average is the worst in the majors, and their ERA the worst in the National League. Remember, though, the 1962 Mets won only 40 games but won the World Series in 1969, and the Detroit Tigers went from 43 wins in 2003 to finishing in the playoffs in 2006. The Nationals do have individual talent (like Zimmerman and Dunn). But something is terribly wrong with the management, and with some of the other players.

As I recall, around 1957 or so, the Detroit Tigers and Cleveland Indians actually traded managers. You have to fire the leadership; you can't fire the troops, no matter how badly they perform.
Posted by Bill Boushka at 5:55 PM