40 years after Man first walks on the Moon 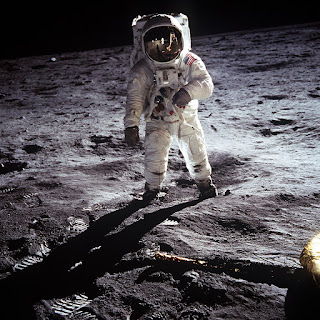 “That’s one small step for man, one giant leap for mankind.” We’re getting ready for the fortieth anniversary of Man’s first steps on the Moon.

I’ve always though it interesting that man’s first steps on an extraterrestrial planet, on Sunday July 20, 1969, with Apollo 11, occurred about four weeks after the Stonewall riots. Both events stressed that man had a tendency to change his own psychological goals because of technological advance: while family matters, the individual’s own path in life, now aided by technology, matters too.

I remember those days. I was stationed at Fort Eustis, VA, tucked away safe from combat in Vietnam. The “new” Washington Senators did well that year (finishing 86-76) although they would skip town two years later.

And although there were a few more moonwalks, in time the manned journeys died, and we are no where near going anywhere else (Mars) with a manned journey. The MGM film "2001: A Space Odyssey" (which I saw right after Basic at the Uptown in Washington) imagined commercial space travel and chain hotels (Howard Johnson's?) on Luna by the year that 9/11 would happen. Instead, our revolution would be one of instantaneous communication, which could mean instant self-publication, self-promotion, and networking. Our world would change suddenly and have to acclimate to new forms of asymmetry.

Perhaps the kids in AP courses in high school, or in college, or recently graduated from college will, with their own wits, create another revolution, not yet quite imagined, and get us into space again. Perhaps we will somehow tap into theories floating in the 1970s that information could travel instantaneously even if normal energy and matter can’t. Perhaps we will invent a “Smallville” device that can manipulate space time to transmit information. Maybe that will replace today’s email and chat with telepathy – and perhaps our world will take on the character of the Harry Potter movies. We will then have to be very careful with our thoughts. Brain waves will change bits on a computer hard drive and perhaps enable fraud. Ordinary security will be a thing of the past. Maybe we will approach childhood’s end and take on a group mind. That sounds like the biggest danger.

Labels: the future of technology