Stonewall's 40th Birthday: Activism and introspect (and then remembrance) 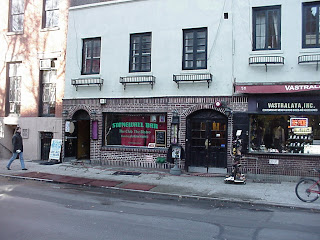 Today, June 27, 2009, is the 40th Anniversary of the Stonewall Rebellion in New York City, the milestone of the “modern” period of gay civil rights. A few weeks later in 1969, while I was in the Army and tucked away at Fort Eustis, man would walk on the Moon for the first time. I, then 25, was in better condition than at any time in my life. I remember a church retreat softball game that took place approximately on this date, where I hit a legitimate home run, over fences in a regular softball field, an unusual feat for me. The “new Senators” had a good year in 1969, finishing 86-76 (look at the Nationals now, 21-50, not even .300 ball).

Michael Hamill Remaley, an openly gay writer from New York, has an op-ed on p A15 of the Washington Post today, “Stonewall baby, all grown up”, here. Today is his 40th birthday. He was born on this day and raised in Pennsylvania, by liberal college professors, but didn’t really see things change until well into the 1990s. He was a teenager when learning from the media about the horrors of AIDS in the mid 1980s.

If I do my gumshoeing right, “Public Agenda” is one of the groups he has worked with I like the group’s page “What is Public Agenda?” and especially this statement: “Public Agenda's in-depth, unbiased opinion research bridges the gap between American leaders and what the public really thinks about issues ranging from education to foreign policy to immigration to religion and civility in American life. Instead of supporting one particular side or another in a partisan debate, our research powerfully clarifies public attitudes about complex policy issues in ways that move the nation’s public policy dialogue forward toward fair and effective solutions.” That sounds a lot like what I have been calling “do ask do tell” in my books and blogs. I’ll look into all of this more. You can see his profile at "Issue Guide Exchange" on "Everyday Democracy" here. Yup, online profiles and "reputation" have been a big topic on my own blogs.

His article mentions his current connection to the Russell Sage Foundation, which apparently focuses on issues surrounding work, especially low income and immigrant work. His article describes how one can build a career researching in policy organizations. I worked for Lewin (health care) for a while at the end of the 1980s but then went off in my own direction.

As for the columnist, I could sing happy birthday, but my voice doesn’t have good pitch (my ear does, however, enjoy nearly perfect pitch). Nevertheless, it’s time for the black balloons.
Posted by Bill Boushka at 11:39 AM