Online Reputation Redux (and Mine!): Sifting down to "The Privilege of Being Listened To" 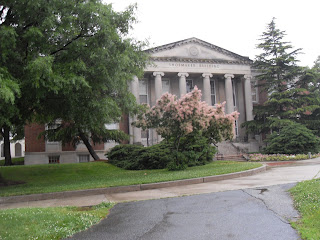 In August 1994, while I was vacationing in Colorado, I had a “before-after” epiphany. On a hot Saturday in Sterling, Colorado (supposedly known for rumors of cattle mutilations), I went into a family restaurant for lunch. I picked up a local newspaper and vaguely remember seeing a wire report about “don’t ask don’t tell.” By the time I had finished a BLT and coffee and gone out to my mountain-ready stick-shift rent car, I knew I would do my book. I knew that eventually my life would change, and I had, mentally, committed myself to an irrevocable course. It wouldn’t cause any changes immediately, but now there have been many events in my life as a result of that decision.

One of the sequelae from the book was my massive Internet involvement. Yes, starting around 1997 I took advantage of the “no barrier to entry” environment for self-publication and self-promotion on the Internet, and by 1998 I realized how effective search engines would become, with little effort. Some of what followed I already discussed in my post on Saturday.

There was some special about the military gay ban as a political issue, that it seemed to live at the center of so many other “moral” issues as we had perceived them all the way back for several generations. Rather than discuss it in the usual simplistic arguments of immutability, suspect classes, discrimination, and equality (although all these matter), I drew “existential” connections to a lot of other issues that bear on what we think of today as “individual sovereignty” or “public morality.” Eventually, over the years, a huge web presence built up, with some hundreds or thousands of page requests a day, and large numbers of people knew my “system of thought.” Without competing for attention in the old fashioned way, I had used the Internet to become somewhat of a “public figure.”

My “reputation” had been built mainly by self-publishing, not social networking; but, as we outlined last week (May 30), after social networking came into vogue, employers and businesses started catching on (as did law enforcement), and the media caught on to the idea that “online reputation” needed to be viewed as seamless with real-world reputation, but was so much more fragile because digital files are so portable and permanent.

In my case, my “reputation” seems to be linked to a particular worldview that some people see as having disturbing existential implications. The talk of “personal responsibility” (and the way “meritocracy” works --- the “John Stossel Problem”) can lead to leaving the impression of distance, coldness, or even sometimes contempt for some people. In some jobs, such a “reputation” could be a hindrance, such as when one has supervisory authority over others or must “get business” for the employer. That impression may be misleading, however, because businesses, despite thriving on an economy with a “competitive meritocracy” will find that customers with less “self sufficiency” tend to generate most of their demand and opportunity for profits, so the whole philosophy tends to have a self-balancing effect, which many people do not see at first.

Another potential risk comes from “gonzo journalism.” Although the speaker (like me) would honor confidentiality in the legal sense, the employer or business partner might fear that the applicant’s ultimate purpose is (at some unknowable time in the future) to write about controversial situations that will inevitably occur in almost any business.

The great psychological benefit is a freedom from “political loyalty”. If I can speak and publish for myself, I don’t have to go along with partial positions that I disagree with, nearly always the case when supporting political activities by groups or specific candidates.

The web is with us, and people compete with it, on social networking sites (both professional and truly “social”) and people like me who got in earlier place a lot of emphasis on publication for its own sake.

I talked about blogging policies the last time, and how they should work are a bit up in the air. But several more suggestions come to mind:

First, employers should consider which jobs require that the identity of the employee be known to the public. In call centers, many employees are known only by first names (that is particularly true of debt collectors, too), so that customers do not have the opportunity to check the people online. In a job where someone is an “individual contributor” (like a computer programmer), the issue may not matter nearly as much, unless the person is promoted later, or is sent to client sites where the clients might be tempted to check the person out with search engines (although that is quite a common practice in information technology contracts).

Second, employers should constantly reconsider how they should use agents and salesmen in marketing their services or products. “Knowledge management” has become much more the prerogative of the individual today, and many people do not like to be called as prospects.

But, third, and mainly, employers should level with applicants on the online reputation issue. They should tell applicants what they will check for, and give applicants the opportunity to verify that the material they find is really the applicant’s. In some cases applicants might have to remove material, even from caches and the Internet archive, before starting work.

As for me, my commitment to what I decided is irrevocable. Even “The Donald” says to be consistent with and faithful to your own chosen goals. But I’ve discovered that many people resent the idea that someone (me!) would “keep a high profile” without being willing to make the emotional commitments and take on the uncertainties and risks (associated with family life – Strauss’s “Sinfonia Domestic”) that others take, and then become involved in an intellectual way with the “justice” component of such a broad range of issues. Maybe that idea (“The Privilege of Being Listened To”) has no legal meaning now, but someday it will certainly have a practical meaning in how reputation management is handled and viewed.
Posted by Bill Boushka at 8:33 PM