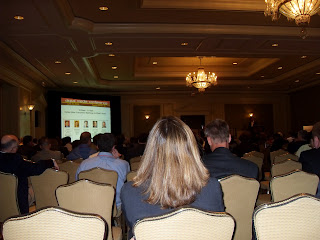 On Thursday, June 25, 2009, Digital Media Conference held its East Coast conference at the Ritz Carlton hotel in Tysons Corner, VA. Many people traveled from other East Coast or midwest cities to attend.

The general tone of the conference is that the monetizing aspect of the Internet is increasingly challenged by recession, natural evolution of a market, and by the threat of more regulation. But there was a lot of optimism during the 8 hour event nonetheless. Here’s the basic link. This link gives the names of all the speakers and panelists and sessions.

A keynote interview of Rick Cotton, general counsel for NBC, indicated concern that providers of “professional content” must prevent piracy and theft of their materials, but that the public was free to choose between major media content and inexpensive content from those with less capital. The media industry does not object to “competition” from those with less capital.

The opening presentation of digital media trends came with a “warning” that much more government regulation was on the table in Congress. There was talk of “restrictions around the flow of data” and the idea of a “do not track” set of laws. Yet it is "tracking" that makes interest-directed advertising possible and profitable, and that helps support free and amateur content on the Web; to me, this sounds a bit alarming.

The same theme came about in the last panel discussion, “Is the Newspaper Dead”? Several problems were noted, including the poor financial health of some newspaper holding companies, and the desire to have public or non-profit funding of some components of the newspaper business. Rick Edmonds, from Poynter Media, spoke about the non-profit ownership of some Florida newspapers. I asked about the issue of competition from “free entry” bloggers, and the general impression was that blogging was welcome insofar as it adds new real content, but merely rehashing or reposting of stories already carried by news media could pose copyright problems, but the law was ambiguous. Generally, until now, media companies have been much fussier with video and music than text, except perhaps for the AP case. The panelists were under the impression that most successful blogging is expressive of "hyper-localism" but that is not always true: sometimes local issues (like taxes or zoning) in a particular community are predictive of what is likely to happen later in many other communities.

One of the panels made a comparison of Facebook and Myspace. Facebook is more concerned with external streams and tended to reflect much less of what the member says about himself than does Myspace, which it sees as closer to a publishing facility. Yet both are perceived as having a major impact on “online reputation.” It is difficult for smaller businesses to use Facebook in their promotion strategy because Facebook “changes the rules” so often. Myspace’s core competency was said to be “music.”

Panelist varied in their attitude toward the “bottom line” kind of thinking and “market fundamentalism.” The panel “investing in digital media in a down market” emphasized that investors need a return in any project. Yet one of the keynote speakers, Mark Renshaw, showed two short films about “socially conscious projects”: “Building Blocks”, about a partnership between Whirlpool and Habitat for Humanity, and then “Vote! Earth!” about a voluntary effort to close down electrical use for one hour on March 28, 2009 around the world (starting in Sydney, Australia).

Here's another account of the "gospel" by Brad McKay, PhD, of "Creative Economic Analyis" on his wordpress blog, with this link.
Posted by Bill Boushka at 6:22 PM