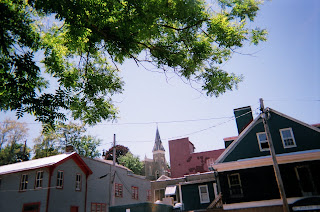 Jon Swartz has a cover story today Tuesday in USA Today Money Section, “A World that’s all a-Twitter: Instant public communications service has millions tweeting,” with this link. The article pictures founders Evan Williams, Jack Dorsey and Biz Stone, and discusses Evan Williams’s history as co-founding Blogger. All three men are college drop-outs – and I recall discussions back from an Ayn Rand oriented roommate back in the 1960s at KU of the virtues of scrapping in the engineering business world “without a degree”.

Twitter does have to produce more revenue, and almost any business model proposed to increase revenue could reduce the number of subscribers. It’s power would be universal acceptance as a global instant communications and microblogging tool, something that works for people who move around and can really attract followers to their micro “soap boxes”. Ashton Kutcher is perhaps the best known celebrity to champion it.

Twitter could be an effective micro-journalism tool, for people who really can attract followings “as people” as delivers of “what you need to know right now” about some area of life. Perhaps many people will see it as the height of attention getting and "creative narcissism."

Or it could be seen as a customer service tool (for cable companies) and even a sales tool (for financial planners and brokers).

Would it work for a blogger as platform for continuing a stream of breaking news? Maybe. I’ll look into it.
Posted by Bill Boushka at 10:13 AM