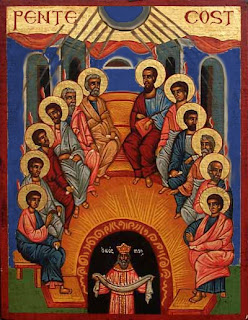 At the Trinity Presbyterian Church in Arlington VA today, Rev. Bernie Nord (from Arizona and Ohio) gave a Pentecost Sunday sermon “The Field-Leveling Spirit”. It was fairly brief, but fairy early made some comparisons: “A is not better than B”. He mentioned the Middle East problem, and sees it the same way Jimmy Carter does (that is, people from Israel do not have the right to expropriate the land or resources of people from Palestine), but he suggested many other domestic comparisons, some more “obvious” than others, given our history. He mentioned that “Young” is not better than “Old”, for example. I think he would have said that Straight is not better than Gay.

Of course, the obvious connation is social justice. Equality, the way an organization like the Human Rights Campaign would put it, is obviously an important goal in his thinking.

In practice, human society and history is so complex than abstract equality gradually becomes meaningless. We value “freedom” but in a real world, much of what we have depends on sacrifices of others (sometimes of our parents or ancestors, sometimes of contemporaries) that we never become aware of, much less appreciate. New Age religions express their concern with this idea by using the word “karma.” In the past, totalitarian regimes have tried to enforce “equality” with draconian methods, such as when Red China’s Chairman Mao instituted the Cultural Revolution and put intellectuals into the countryside along peasants. We ran into the same idea in the 1960s with the Vietnam era military draft and student deferments.

In the 1990s particularly, we moved into a cultural that placed considerable emphasis on the ideas of “fundamental rights”, and especially the right to choose a consenting adult significant other. As a corollary, we assumed that there is a right of consent, and a right to refuse unwanted intimacy—a concept that American and western law nearly always ratifies (particularly after the 14th Amendment). In a media and information saturated age, such a structure for individual rights favors the development of individual autonomy or separateness, and the ability to discern what one really wants before committing to a permanent relationship (like marriage, and maybe having children). In a society like ours, it often works well for some people (you never need to be jealous if you are free). Yet, our “individual sovereignty” is more fragile than we think, more easily undermined by outside forces stemming from indignation over the sacrifices that it took to get us here. No wonder there are some “conservative” religious groups (the Amish, the Mormons) that emphasize family and group solidarity and appreciating the value of “people as people”, beyond the capacity for choice.

Freedom seems to be incompatible with perfect justice and perfect equality. We can only approach these aims as a limit, like in calculus.