New site urges one to "take a contract out on oneself", or else support an "anti-charity": why "free entry" is so important, after all 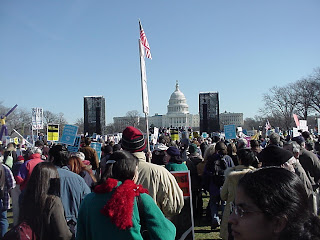 Yesterday (May 4) one of the local television stations ran a story about “Stickk.com”, a site that encourages you to “put a contract out on yourself.” You define a goal for yourself (weight loss is common, or perhaps living green according to certain metrics). You put up some kind of collateral (we’ll get to that in a minute) and “hire” a referee, and then if you don’t make it you forfeit the money. You gain if you make the goal, from some common pot. The “referee” reminds me of a trustee enforcing a “dead hand” clause in a will. The ultimate anti-libertarian put down is to be forced to support (at least through conventional lobbying or petition campaigns, however constitutionally protected) OPC, other people’s causes.

One of the penalties could be that the collateral goes to an “anti-charity”. Stickk has a list of twenty-plus organizations that are unpopular with some people, including the NRA, and possibly organizations that support gay marriage.

Now, that reminds me of another aspect of my life that led to my writing my books and getting into blogging. By joining a group (or a union), people often have to support “causes” (that is, “sub causes”) that they personally don’t approve of. That’s particular a sensitive issue with libertarians, who don’t like to see people diced up and classified into “suspect groups” of “victims” (even Dr. Phil is willing to say that some people are victims).

The “free entry” opportunity for Internet self-publishing fits well into this concept (and it did so starting around 1997 or so, well before social networking sites came along). Merely by making a subtle point where it is likely that many people will find it because of search engines (and this could be done with flat sites, even before blogging as we know it today became popular), a single individual can make it difficult for “special interests” to over-simplify some issues and misrepresent them to get their way. I made this point in the affidavit that I submitted as part of the COPA litigation in 1999.

In fact, point 38 on that affidavit is well worth repeating here:

“I believe that the High Productivity Publishing site [the original name back in 1997], along with other small sites containing political speech, is very important. With desktop publishing and the World Wide Web, a single person such as myself can compete with well-established and well-funded organizations and make an impact upon public debate of important and timely issues. My site is valuable because there is no outside supervision and I owe no loyalty to large organizations to support other groups' issues so they will support mine. In my case, there is no point in operating a site that does not have some moderately adult content that is conveniently accessed and searched by researchers.”

There is a rub to this, that has always concerned me. Call it the “George Mason Problem” if you like (as in my posting Sunday May 3). People take talkativeness and an excessive preoccupation with “objectivity,” an indication that one has no responsibility for others. (George Mason disproved that.) “Free entry” speech, if it is not accountable to some standard (such as contributing in some measurable way to profitability, or demonstrating earnings on its own) can lead to unspecified but possibly systemic risk, so the theory goes. So far the legal climate has been somewhat protective, such as with the Section 230 law and the favorable rulings in COPA and somewhat related cases.

I am aware of these things and think about them a lot, but I also look at the alternatives. Yup, that means throwing support at “anti-charities” (as I see them), way beyond those on Stickk’s list. That also means being limited to sending form letters and emails to politicians, and acting in a generally hysterical matter about one’s own sense of victimization. I do remember how it was over all these decades. I certainly remember the demonstrations (and attend or journal enough of them on the Mall in Washington). I can remember silly demos like the “lettuce boycott” of the People’s Party of New Jersey all the way back in 1972.
Posted by Bill Boushka at 7:01 AM