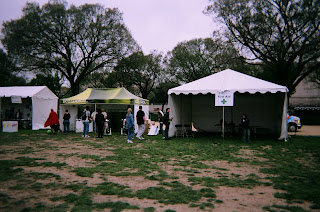 U.S. District Court Judge Marilyn Hall Patel will hear a case in San Francisco to determine whether a previous ruling preventing RealNetworks from selling RealDVD stands until trial. She is the same judge who ordered in 2000 that the original Napster must police itself for copyright infringement, a development that led to its shutdown and reemergence as a paid service.

The Information Week story (April 24) is by Anton Gonsalves, with the title “Napster Judge Hears Hollywood, RealNetworks Arguments: The movie studios sued RealNetworks in 2008, accusing the company of violating their copyrights,” link here.

The Examiner has been carrying an AP story here.

Real Networks's latest statement to its customers occurred in Nov 2008 and is here (PDF). The company has a RealDVD domain with a litigation update page here.

What is at issue is that at this time the software would allow people to copy a rented DVD onto a PC. Conceivably, someone with a movie rental account could build up a library of illegal movies, limited only by hard drive space. Studios call the practice “rent, rip and return.” On the other hand, encryption does effectively prevent removal of infringing movie copies from one computer to another.

In 1984, the Supreme Court had ruled that manufacturers of video taping equipment could not be held responsible for copyright infringement because, generally speaking, the devices had legitimate non-infringing uses, such as copying a recording copy you already own to prevent wear. (The case was Sony Corp. v. Universal City Studios, wiki article here.) I used to copy phonograph records that I owned to cassettes to preserve them from wear. Likewise, the current technology can copy a DVD you already own, but it is less likely to happen since DVD’s don’t wear out. In MGM v Grokster, the Supreme Court had ruled that a manufacturer or vendor could be held responsible for downstream, infringement if its business model was predicated in infringement.

As an artist myself, I understand that Hollywwood needs a sound business model (even to make my movie some day). But what’s needed is not Hollywood judicial protectionism, but innovation. Is it that hard to design a rental DVD so that RealDVD cannot copy it? Rental DVD’s are already manufactured separately and are generally not available for sale now. Why is this so hard? Does anyone know?
Posted by Bill Boushka at 6:26 AM