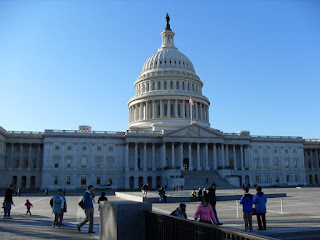 Glen Greenwald has an important article in Salon in which he reports that the Obama administration has taken “sovereign immunity” arguments even further than did the Bush administration in protecting the government from litigation for warrantless wiretapping. That is, the Obama administration is claiming that the government can spy on domestic communications all it wants (not just to protect “state secrets”), and is immune from lawsuit unless it makes an unlawful disclosure. That is, the government could collect data on your wireless transactions illegally all it wanted (even when it knows it is acting illegally), and might be able to use it later for prosecutions. The link to the Salon article is here. The article (“New and worse secrecy and immunity claims from the Obama DOJ”) has a number of images from the Obama DOJ briefs. This sounds sort of like the Frost/Nixon line “if the president does it, then that means it is not illegal” – that is, if the government does it, it is not illegal.

Salon, by the way, was one of the major plaintiffs in the COPA trial.

Marc Ambinder has a similar piece in The Atlantic, “Shut Up: It’s Still a Secret”, link here.

The mid 1990s, about the time that the Libertarian Party had its national convention in Washington DC, sound like the good old days now.

I doubt that Congress wants to do much about this. Really.
Posted by Bill Boushka at 6:20 PM