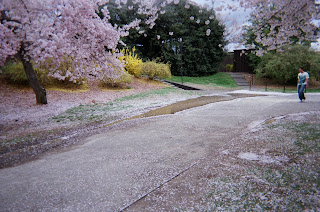 Today (Saturday April 25) AlterNet offered a long article by Tom Jacobs of Miller-McCune, “Conservatives Live in a Different Moral Universe – and Here’s Why It Matters”, link here. I couldn’t find it directly at Miller-McCune yet.

Jonathan Haidt, of the University of Virginia, had offered five categories that define moral character. They tend to form a diagram that reminds one of the “Nolan Chart” or “The World’s Smallest Political Quiz” – this would become a “world’s nearly smallest morality quiz”.

The categories are worth repeating here

To me, this formulation seems to mix up “liberalism” with “libertarianism”, which we know from the Nolan Chart are very different views.

Libertarianism views the world in terms of individuals, and liberalism does so when “convenient”. It seems to me that, curiously, in a world of moderate socialism, “fairness” is often debated more among groups than among individuals.

But it is true, that to many people, the “harm” principle is the most important foundation: do no harm to others, and do not violate their scope of consent, and honor voluntary promises or contracts made. That generally matches how we understand libertarianism. Another principle that goes with it is “personal responsibility.” We have often called the collection of these concepts “individual sovereignty” or “personal autonomy”.

The essay discusses loyalty and authority, and explores the idea that loyalty to blood family can be more of a virtue than holding individuals in a family responsible for their own acts.

Social conservatives tend to believe that “equality” or “fairness” as liberals understand these notions are not possible without respect for the authority of the family and of certain social structures. A social conservative would say, if it were not for my parents, I could have lived in the streets myself, so I should be loyal to them, at least if they were faithful to each other and to me, and provide for them. They also believe that stability and fairness are not possible unless individuals are ready to make some sacrifices in some situations determined in part by the authority structure. Religious conservatives act as if they believe that they could not maintain the marital intimacy necessary to provide for other generations unless their relationships are socially revered. We see this idea coming back today with issues involving eldercare and with the demands on other family members sometimes necessary to give medical care to ill family members (consider what organ transplantations require, and they are more common today than they were twenty years ago).

“Loyalty to blood” could be viewed as a fairness idea in some perspectives. If a world has limited resources, the resources should go first to people who will take the risk of (and have the capability of) reproducing themselves within approved family structures. ). The idea of abstract “respect” for position in family is supposed to be transitive: once someone goes off on his own and decides that it is meaningless (wants his own life on his own terms only) the chain tends to fracture. Liberals do note that some people (such as gays and lesbians) do not want to be forced to “compete” in life according to the somewhat arbitrary social structures set up for them by the (marital) sexual relations of others.

Purity and sanctity, while seemingly religious in origin, would seem necessary to support social structures.

Libertarians believe that people should be responsible for the children they “choose” to have (yes, marriage is a good thing, but it’s still a private contract). Both liberals and conservatives (and outright authoritarians) believe that caretaking is a community experience that everyone must share because everyone has received it; hence a religious and family power structure can get to make the “rules of engagement.”

Male homosexuality represents a certain paradox. Why we correctly think of the movement for equal rights for gays in terms of concepts like harmlessness, fairness and reciprocity, the underlying interest reflects and expresses a personal belief that, deep within, “authority” matters and that someone should “deserve” his right to wield it, perhaps in terms of external trappings of manhood. The freedom allows experiences that have, within the personality, certain almost ritualized meanings, sometimes associated with psychological defenses. On the other hand, there can develop a creative component, where the point is a polarized relationship for the happiness of the adults in a relationship, without regard to the social structures around them. When the experience remains localized, it is usually carried out without interference from others; as it takes on more public significance, as in a global world and with expression on the Internet, it creates more controversy and conflict.

One risk is that concerns over sustainability (climate change) will force people, used to individualism, into more interdependence and that social structures generally supported by “conservatives” will become more important again.

You can take a “pretty short morality quiz” at Your Morals. I scored more “liberal” than I was expecting. Also, visit “Civil Politics”: "Can’t we all disagree more constructively?”
Posted by Bill Boushka at 7:14 AM