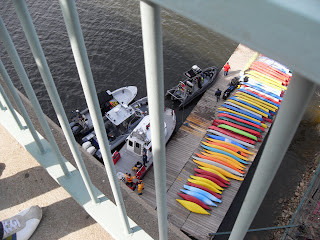 On Tuesday March 23 the Supreme Court heard oral arguments concerning a DVD film “Hillary, the Movie,” directed by Alan Petersen, produced by Citizens United. When the group used corporate money to advertise the film during the 2008 campaign, it ran into federal campaign finance restrictions.

There is a story from David G. Savage of the Washington Bureau of the Chicago Tribune, story titled ““Hillary: The Movie": Supreme Court hears film's challenge to campaign finance laws.”

I ordered it from Netflix and it has a “very long wait.”

I would be concerned about how this could apply to other films. If corporations had paid to advertise movies about “don’t ask don’t tell” like “Ask Not,” could campaign finance restrictions applied? How could this affect independent film of a political nature?

We’ve already settled a major controversy about bloggers and campaign finance reform in the past.

Picture: from a shoot on the Potomac River of the new show "Washington Field".
Posted by Bill Boushka at 9:38 AM