Facebook at 5: Zuckerberg and Cox shown in chess "5 minute" game -- for real? 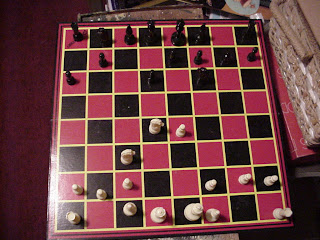 Brad Stone has a major story “Is Facebook Growing Up too Fast” on the front Business Section page of the New York Times today, Sunday, March 29, 2009, here. The HTML title includes “Facebook at 5”.

What caught my eye is a big color photo (by Peter DaSilva) of CEO Mark Zuckerberg and Chris Cox playing a game of what appears to be 5-minute chess. But when I looked at the position, it made no sense. The White Queen is on d1 and is in double check from the Black Queen on d5 and Bishop on g4. I don’t think that position could have arisen legally.

The White Queen sometimes is on d1 in one variation of the Winawer French, but this is not that. If you’re going to do a big publicity photo, set up a controversial position (say from the Dragon Sicilian or Nadjorf, or Benko Gambit, or maybe even Ruy Lopez Marshall Gambit) and it will get a lot of attention, at least from the chess community. Or set up a tricky endgame with underpromotion or manipulation of the opposition.

The article, though, is thorough. It goes into the concept of homophily, the tendency of people of like minds to congregate socially (“preaching to the choir”). The Rand Corporation analyzed a related concept, “propinquity”, in trying to propose how to lift the ban on gays in the military. Facebook, like other social networking sites (and Facebook reached 100 million members in August 2008) breaks all the social boundaries. Yet, the article explains, it can bring families together.

The article does discuss the concern about employers finding unfavorable materials written by associates, but barely touches on the broader aspects of the “online reputation” issue which quickly became important in the human resources world when social networking sites were invented.
Posted by Bill Boushka at 1:13 PM

I noted the same thing -- no matter how you figure it, the position is not possible. It is also unlikely that white would have moved his king to Q1. The fact is that with black's bishop and queen checking, there is no prior move. I am surprised more folks did not notice it.

I would conclude that Zuckerberg snd Cox don't really know how to play chess, or they would have been careful about this.

But there must be some USCF masters and candidate masters working for Facebook, maybe enough to have a team. Facebook should have asked one of these employees to choose a position for the paper.

I would expect Google to have a lot of highly-rated chess players working for it. Does anyone know about chess at either company?