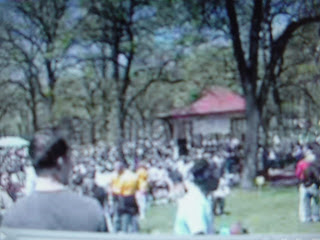 When I lived in Minneapolis (from 1997-2003), I sometimes attended events at the Center of the American Experiment: Defending the American Dream.” John Stossel was the guest at one luncheon, and I believe they helped set up a Cato Institute event.

Recently, one of the founders, Mitch Pearlstein, ran an op-ed in the Minneapolis-St. Paul Star Tribune, Feb. 7, 2009 "Let's give it up for hard times: Most of us have no idea what real sacrifice is. Here's our opportunity to learn.” Here’s the original link for the piece.

Pearlstein goes into some discussions about the Minnesota and federal budgets as well as a recent controversy over steep tuition increases at public colleges in New York. He comes to the conclusion that most of the sacrifice during hard times comes from the poor, not from the middle or upper classes, even though there is some belt-tightening.

He makes an interesting suggestion: if there is a tax cut, compute your own, or at least your own share of the deficit and all of these bailouts that you don’t have to pay now, and contribute it to charitable causes yourself. How many middle class or upper middle class people really could afford to? I think that the bailouts so far add up to $30000 a person, and they’re only beginning. For example, some conservatives say that entitlements will add up to $400000 per worker in a few years, suggesting we will have to learn to take care of our own flesh and blood (regardless of "chosen behavior") again.
Posted by Bill Boushka at 4:36 PM