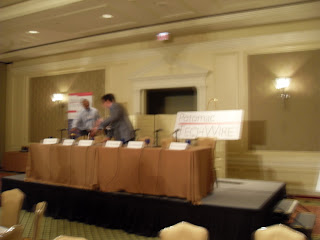 Today, Potomac Tech Wire held a breakfast event “Internet Outlook 2009” at the Ritz Carlton Hotel in Tyson’s Corner, Virginia (near Washington DC). The event was moderated by Tech Wire’s Paul Sherman. The basic link for the event is here.

There were five panelists: Jonathan Aberman, founder of Amplifier Networks; Phil Bronner, a partner of Novak Biddle Venture Partners; Louis Derechin, founder of Jack Be; Hooman Radfar, co-founder of ClearSpring, Mark Walsh, political activist and CEO of GeniusRocket. The Potomac Tech Wire link above gives secondary links to each of the five sites primarily associated with each panelist.

While we ate a delicious and bad-cholesterol-laden eggs and bacon hotel breakfast, the panelists discussed a number of questions (“grade 1 to 10” type) put to them by the moderator, and after about an hour we had almost an hour for audience questions from about 150 attendees.

The questions tended to be dot-point in nature and general in subject matter, but I want to hit on a few major points that were covered, some of which could become critical for me.

First, the World of “indulgences” is still with us, even in a “depression”. The event was festive, and one general theme was that economic downturns often turn into opportunities for ventures with the right, pervasive concept and staying power. We all know who those companies are. Innovation, they say, is much stronger now than it was during the 2001, post 9/11 recession. And, they say, many concepts or buzzwords are overhyped now but will come back strong later. An example is "green" technology. (I thought about Thomas Friedman's "energy Internet".)

The entrepreneurs tended to stress the importance of scale, and of the ability to deploy some sort of product or service to all possible users. One of the panelists invented a term “Internet ecosystems” as separate paradigms or models for user Internet experience, and then suggested that it sounded more promising to come up with a new ecosystem and then scale it big, rather than try to change an existing ecosystem. For example, that could mean that new modes of social networking could be more promising as future businesses than new applications for existing big social networking sites.

One major point shared by all panelists was that the Internet tends to make everything, and particularly everyone, “transparent.” There is no “private life” when a cell phone could tell you if someone who owes you money is walking down the street. (Think what this means for members of the Armed Forces and the desired future elimination of "don't ask don't tell".) People are changing how they think about their lives, and their notions of not only privacy but also personal sovereignty (privacy and reputation have received a lot of attention from George Washington University law professor Daniel Solove). People, even sometimes now some seniors, are thinking of their lives as being conducted in more than one space at the same time (an idea that in the past was the province of science fiction, especially Clive Barker’s).

Along the lines of "transparency," the panelists indicated that social networking sites, while somewhat overhyped now, would become strategically one of the most important business models for the Internet, and that new forms of social networking infrastructures were already being tried, both in business and sometimes in more specialized communities. However, these networks would need to remain innovative and achieve some real global scale quickly. Their underlying social validity (maybe even expectations of "loyalty" from subscribers) would have to be carefully thought through.

I asked a “two-part exam question”: to comment on the “reputation defense” problem and on all the complicated liability problems (trademark, copyright, privacy invasion) that had been surfacing, especially overseas. On “reputation” one panelist thought that this was a good place for innovation: to go beyond having companies help manage online reputation to developing automated tools for removing derogatory items from the Web. One reason for doing it this way is that reputation is very much “in the eye of the beholder” and very much a widely varying cultural concept (beyond the obvious concerns about showing underage drinking and “bong hits”).

The liability question led to a general expansion of concern, as some in the room started to realize, probably, that I could be referring to the recent “prosecutions” in Italy (and the Netherlands, over a film about Islam). Panelists thought that the liability concerns (say, calls to weaken Section 230) could slow the growth of the Web in a time that we need growth and could become troubling. Advertisers, it was noted, are tending to become more skeptical of amateur content compared to times past, partly for these reasons and partly because the tools to measure effectiveness (cpc) and to tailor them to individual viewers have become so pointed and sophisticated.

One person in the audience practiced some stream-of-consciousness and, in response to my question about liability, mentioned a Wall Street Journal op-ed today by Judy Shelton: “Capitalism needs a sound-money foundation” (p A13 Feb. 12) (link here), suggesting the abolition of “legal tender” laws and allowing people to go back to other forms of exchange. (She argues for gold, but in the colonies people had several forms of currency, including tobacco). Whoa there (especially you Democrats and perhaps Independents), are Obama’s economic stimulus and Geithner’s sticky but vague bailouts still on the brain? Why is this interesting at an Internet conference? Partly because there was some discussion of “virtual lives” (or Second Life – some of this even especially designed for seniors) as large-scale products, where people can vary their medium of exchange, and not go with fiat. But there seems to be an even more daring possibility: conceivably, in the future, people wouldn’t need money at all, but rather “karma”. It sounds like the stuff of science fiction, or the way the nearest civilization, maybe thirty light years away, would work. But it also addresses some of the other intangibles that people expect from activity on the Internet, which include “recognition” or “fame” (which can take pretty juvenile forms with kids on current social networking sites) but also, just command of knowledge for its own sake (all of which would carry a cost of “commitment”).

This brings to mind the last big opportunity on my mind, at least, knowledge management. The conference didn’t address Wikipedia specifically, although it should have. One could accuse someone like me of selling (or, worse giving away) “knowledge spam” (more a social issue than an Internet "abuse" problem) but the real point is not just listing the knowledge itself, but “connecting the dots.” Yes, Jimmy Wales has the right start on this, but I think that professional journalism can do a much better job of connecting our knowledge points at deeper, more psychological and more subtle levels, in a way that the average person will understand much better what is happening (at least debacles like the current economic crisis needn’t happen). Most of the promising Internet business opportunities, they say, may, in the current economic and legal climate go back to helping businesses rather than directly pampering individual consumers. Could new database-driven applications be developed to help the news business connect up everything (better than NSA does)? I think so. Even here, the panelists offered a clouded future for traditional journalism, saying that for-print newspapers would have to turn into not-for-profit foundations, and that the real news may come from individuals online after all, in every media conceivable. For business, this sounds like a perfect storm.

Visitors might enjoy (with some "irony") the Newsweek "Techtonic Shifts" article by Don Lyons, "Time to Hang Up the Pajamas: I learned the hard way: while blogs can do many wonderful things, making huge amounts of money isn't one of them", Feb 7, 2009, link here. True, but there can be other motives besides just money (like throwing sand in the eyes of lobbyists and special interests).

There is a related short blog entry on "Amplifier Networks": "Is Blogging a Business or a Hobby," by Jonathan, Feb 9, link here (may require registration). Also, please see the comment.

USA Today, on Tuesday Feb. 17, opens its Tech section with a long article by Jon swartz, "New tech start-ups can rise from the economy's ashes," link here.
Posted by Bill Boushka at 4:18 PM

Your question from the floor was right on and I enjoyed reading your post. I hope that your readers will take the time to check out my own blog and other resources at the Amplifier Network Startup World community (http://amplifiernetwork.ibelong.com/Pages/Layouts/GroupPage.aspx?SiteId=2213&PersistentTheme=amplifier). Thanks, Jonathan