Newspapers and magazines look for ways to coax users to pay for online content; an issue for bloggers? 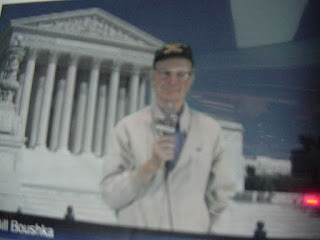 Today (Feb/ 19), the Washington Post, under “Media Notes” runs, in the Style Section, p C1, a mournful column by Howard Kurtz, “How Low Will Newspapers’ Ad Revenue Go?” The link is here.

Newspapers have long been contracting. At one time, Washington had an “Evening Star” which folded decades ago. But free content, newspapers say, is driving down revenue. Since the early 1980s

Is it really a matter of competition from bloggers? Well, bloggers don’t follow the same rigid journalistic standards or procedural fact-checking (and that’s getting to be a risk, maybe, as we covered in the EFF Legal Guide Saturday), but bloggers often offer a fresher and more original account of news events (like demonstrations, trials, sports events, or the internals of organizations) than can the established media. But the real problem seems to be the increasing pressure on newspapers to offer their content “free”.

Most newspapers require free registration to see content, and many charge for articles once they have been archived, and many charge only for some archives but not all. Some, like the Wall Street Journal, charge (on subscription) for some of their new articles, especially detailed financial analysis (as when accessed from Yahoo!). Academic, scientific and medical journals are still able to get users to pay hefty subscriptions for content.

Newspapers are considering ways to make it easier for users to “pay” for new content, the story says.

There is a site, Kachingle, which offers to help the reader “support the blogs you love.” The corporate blog has some links on the subject of “monetizing content”. There is an article by founder Steve Outling, Feb. 10, 2009 in “Editor and Publisher” that explains in detail how Kachingle works, (“Forget Micropayments: Here’s a Far Better Idea for Monetizing Content”, here. The system involves a machine-based medallion that recognizes you.

This proposal could be compared to Walter Isaacson “How to Save Your Newspaper” on Feb. 5, a cover story for Time Magazine (link) which starts out by saying that continuously fewer readers are paying for content. He wants an efficient system where users pay a nickel or so for every article. The bloggers are weighing in quickly on this, for example “Bristol Today” on Feb. 7

Would charging micropayments for content affect the practicality of bloggers deep-linking for content, which has come to be understood (since a couple of cases around 2000) as legally valid, since a deep link is essentially like a bibliographic reference?

Some news organizations seem to be finding outside funding sources, such as ProPublica (which the Post says has connections to Democratic Party figures also connected to the financial crisis).

Spot.US (yes, named after the pooch in the famous kid’s reader) funds collection of stories from voluntary contributions (see its strile page; note how it prods the visitor to donate with "Help fund this story!). Another interesting experiment is “Talking Points Memo” for “independent reporting”.

Larger, better funded public high schools offer journalism as an elective in the English department (that’s how they do their school yearbooks) and in many schools this is the one place that high school kids are taught about problems like copyright (beyond plagiarism), libel, invasion of privacy, and fair report. The transformation of journalism would affect how it should be covered in public schools. Some English teachers have tried experiments with blogging, to the dismay of administrators!

Remember, after all, Clark Kent becomes a journalist (and that is already starting to happen in Metropolis on Smallville).

On p A12, Opinion, of The Wall Street Journal, there is a letter "Free Model Hurts Science Journals" by H. Frederick Dylla, Executive Director and CEO, American Institute of Physics, College Park, MD, link here.
Posted by Bill Boushka at 6:55 AM

I don't think you conflated us with newspapers - but just for the record: Spot.Us is not a newspaper endeavor. It's a nonprofit. I'll fundraise for bloggers too - as long as the blogger is ready to do serious journalism (and for me journalism doesn't = newspaper).

A very good blog post overall. It will be interesting to see what happens next.