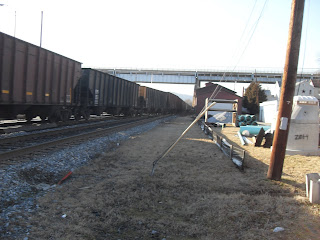 “I can do whatever I want.” Well, no I can’t. Actually, that’s a key line toward the end of a notorious gay horror short film “Bugcrush” (Carter Smith), but normally most of us say that to ourselves when we feel in control of ourselves and our lives. We have a right to free choice. No, we don’t have the right to control others against their will, as in the film.

We’re used to the idea that what limits what we do is the consequences of choices that we have already made. That’s the classically liberal (to libertarian) notion of “personal responsibility.” It even shows up in Southpark.

But then, as I’ve developed in previous post, we find we already owe “karma” to other people, beyond our capacity to choose. In practice, we sometimes have to accept their need for attention, some intimacy, even control. We can’t always express out own values or wishes.

During the current economic crunch and restructuring of our lives and values toward sustainability, we’re likely to hear a lot of calls for more socialization, community, more acceptance of the idea of integrating the needs of others into our own goals. That can even be a critical boon to economic recovery in some areas, to build on the extended family. This development is most unwelcome for introverts like me.

We could be headed back toward a culture where everyone has some responsibility generativity, even people who did not have their own children. We may migrate toward the notion that, before we reward anyone for his own accomplishments (at least once well into adulthood), we want to see accountability toward specific others in some way that is emotionally meaningful. Demographics may help drive this trend.

In that kind of culture, the moral values associated with marriage come to be perceived differently. Rather than behavior expected when one has “chosen” to have children, it is seen as an institution that helps one carry out an obligation one has anyway. The rewards of marriage become as, or more important, than the responsibilities (which often cause marriages to fail). Marriage becomes everybody’s business. Everyone shares some of this because the world has some uncertainty requiring some sense of living in a community and not just immediate “personal responsibility.” That “uncertainty” (an idea embedded in physics – “the Heisenberg Uncertainty Principle”) requires toleration of less than optimal circumstances. For example, gay marriage (and parenting) need no longer be seen as a threat to the “integrity” of heterosexual marriage because it would still be relatively rare (in percentages) and simply a random statistic variation in nature. (The Universe is perfect for life not only in having the right physical constants but also in allowing randomness and uncertainty, necessary for evolution and growth.)

There is this dark side: The “rewards” of marriage come to include some power over the socialization and resources of the unmarried (even as adults). But families, in socializing their children, are preparing them for the possibility that external circumstances beyond their control can change, and force them to accept interdependence on others, even family role fulfillment and intimacy, on terms not of their choosing. It's all so anti-libertarian.

Now Bill, you say, please stop talking. You really mean to advocate such psychological communism as a the next “new morality.” No, I don’t, but I fear it may happen. The natural solutions to our current dilemmas point to it. It used to be this way, until perhaps the 1960s, and the wild pendulum may take us back.

Remember, technology helped enable the rise of individualism (along with some "schizoid" fantasy life fed by the media), and promote the idea that one develops the expressive self before expecting to get serious about seeking and accepting relationships. But that makes us “dependent” on technology and vulnerable. Sustainability concerns (or sudden catastrophes or “mega-disasters”) may force us to localize our work and expression again and become more receptive to people than many of us have been in the past few decades,

There is a very serious corollary to all this in the free speech area. Not so much speech itself, that is, but publication and especially distribution. Until we had the Internet, Web, and especially Web 2.0 with social networking and public blogging, one had to compete through establishment “bureaucratic” games for fame and recognition. Now, it is possible for someone to instantiate himself (or herself) if the content (even without the presence of the person) is unique enough, on its own or in some combination with other things. But what we’re learning is that this comes with a lot of risk that is impossible to estimate. We hear a lot about the risk in the “reputation defense” area. But one thing that makes the “reputation” problem so intractable right now is that personal reputation (suddenly propagated by self-instantiation on the Net) is also tied to the reputations of others in one’s family or business circumstances in ways not always apparent to speakers. That’s because right now we have a wide range of “sociability” in our civilization. Speakers on issues or controversies (beyond speech directly related to social or business networking for its own sake) often do not feel any direct or immediate connection to either their audience or subjects (including “indirect”) of their writings.

All of this can make the future of the self-promotion on the Net that we have gotten so used to problematic. The “free entry” development seems almost like a lucky accident, but some of it relates to some specific laws (Section 230, DMCA safe harbor) that can shield secondary liability. But some people want to weaken these protections, require insurance or bonding of speakers (because of uncertain downstream effects), and advertisers are getting skittish about “amateurism,” partly because of the perceived track record associated with foolish behavior on social networking and gossip sites. We could be headed toward a world where new speech has to be more supervised and where speakers are expected to have legitimate stakes or “standing”, expressed in terms of specific accountabilities to others. This is a possible development that we could not have imagined as recently as ten years ago.

I’ve experienced some pressures in this direction, and in a few cases I’ve found that others want me to accept some sort of submission to their authority and goals, and in many other cases others want be to buy into some scheme where I will learn to “manipulate” others myself for goals chosen by others in authority. It seems that the need for social authority and structure is a given, and it presumes that the community has to survive through somewhat unpredictable perils and even enemies. Right involves more than just assembling truth from different sources, and it can involve selectively manipulating the talents of some and excluding others. It’s all quite disturbing, to me at least.
Posted by Bill Boushka at 6:59 PM

Co-parents.net: Find your co-parenting partners. Do you want to have a child? Co-parenting match for gays