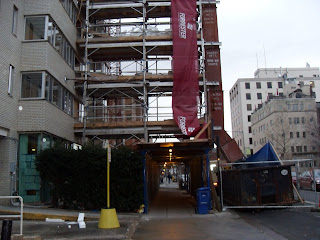 Last week, I reviewed a movie and a book with different sides of the arguments over the “morality” of gender nonconformity, particularly the treacherous areas of “choice” and “immutability.” (Check my profile for the movies and books blogs.)

The book – the title of which is so boorish that I won’t put it here for search engines – came up because the author (Joseph Nicolosi) had appeared recently on a “Dr. Phil” program as an expert on gender issues – in that case, transgenderism, although the book is about homosexuality.

The film, Lifetime’s “Prayers for Bobby” seems to restore some sanity and livability to the whole question. But I’m very concerned about the whole dependence on emotion, whether for tolerance, for religious faith, even for love – because there seems to be an area where the different worldviews come together.

One of the aspects of the current economic crisis is that it is indeed exacerbated by the gradual weakening of the family unit over decades. Given the enormous public burdens to dig the economy out of the ditch, there will be a natural urge to depend more on families to pick up the “slack.” But we have to look at what that “means.”

Some of it has to do with tax credits and breaks for families with children. The childless have to subsidize these, and we’ve debate that, however circuitously, before. But a more subtle issue is the psychological integrity of the “family unit”. It’s possible to imagine changes in the structure of “earned entitlements” that heed this concept much more closely, and affect otherwise unattached adults for lifetimes, not just until they’ve grown. It would also be possible to enforce "filial piety."

Over the past few decades, we have extended the idea of adult independence, to the point that we’ve celebrated complete emancipation of the individual. The expressive self fulfills itself with work, quite publicly, before it need be open to intimacy. Children became the strict responsibility of the parents who chose to have them – and we quickly saw that break down, with a large number of single mothers (often on welfare). Some of this is standard conservative stuff. In the meantime, other lifestyles developed, in what Clive Barker calls the “kesparates” – urban exiles that become almost like other planets (excuse me, dominions to be reconciled). These expansions of hyper-individualism were driven by technology and trusted institutional stability, which history has shown can always be undermined. They tended to import the idea of “market fundamentalism” to an Ayn Rand-like idea of personal responsibility and morality: absolute accountability for the self. Everyone had to be able to function as an “insel”.

The development of adult individualism led to smaller families and fewer children, especially among more affluent populations in the West (with immigrants and minorities having enough children in the US to keep the overall population stable). But this development clashed (almost in the sense of competing air masses in meteorology) with the older model of the family. It needs to be restated. Typically, many married couples believed that marital sexuality, with all its cultural trappings and monopoly, gave them “power” over their own domain, their family. Adult children became emancipated culturally (if already free legally) by marrying and giving their parents grandchildren, continuing the lineage. In many subcultures, unmarried adults were expected to see themselves as members of a family unit and loyal to the goals of that unit; they were not supposed to take on causes on their own that could undermine the family. Parents could expect unmarried adult children to continue to serve as role models and to be prepared to step in and become parents for siblings if necessary (there have been several movies about this). And parents were entitled to be not only care for but pampered by their children in old age.

The smaller families and longer life spans are creating a new culture shock and a demographic economic strain that surprisingly doesn’t get discussed enough outside the right wing, even in areas like social security. Childless adults find themselves confronted with caregiving that now can extend for years. There is some lack of gender parity, as women may live in frail condition much longer than men. Furthermore, changing social and economic conditions are presenting a steady flow of children in need of adoptive parents and, moreover, mentors. Childless adults are finding their sovereignty, or right to it, questioned by the needs of others.

If “unchosen mandates” exist for family responsibility, then there is a chicken-and-egg question. We used to think of family responsibility as generated by having children, making marriage first desirable. But maybe it exists anyway. Then that provides a whole new context for heterosexuality, the passions of falling in love (as in the movies) and the social supports and domain that keep the couple’s passions alive over years past when youthful notions of attraction would be enough.

Of course, and this gets closer to Nicolosi’s “arguments”, it’s possible to map this all to the “moral” concerns about what should be expected of those who, because of “difference” (immutable or not), don’t easily fit into this pattern of family responsibility. I’ve covered this before (like here Oct. 9, 2007). The essential moral problem has to do with everyone sharing uncertainty and risk, which is what family formation requires. Or, it is to eliminate the idea that one person enjoys hidden dependencies on the sacrifices of others of which he is unaware. Of course, the Far Left has made a lot of this (exploitation of cheap overseas labor), and no free society can ever be completely “just” in this sense; a community has to live with some inequality within it. The “family unit”, as we used to perceive it, took care of a lot of this: although a lot of group injustice resulted, it was never the prerogative or responsibility of the individual (except a family leader or patriarch) to address it publicly, and anyone who did could quickly make enemies.

In this regard, Nicolosi (and social conservatives in general) are right in that people, especially before they become independent adults, ought, whatever their personal temperament or difference, to become socially versatile and multiply skilled so they can support others when necessary, even if they don’t have their own kids. Some of that accounts for the pressure on boys to become competent and actually competitive in sports (or in “practical things” as in a father-son conversation early in the “Prayers for Bobby” movie). It’s just good “karma”. (Those of this from earlier generations perceive this issue in an environment of mandatory military service for men and controversy over deferments and who went to the front lines.) Parents often become obsessed with the formality of the way their kids learn to live: that they maintain a readiness (in appearances) to take responsibility for family even if they don’t have to immediately. Perhaps where Nicolosi goes wrong is that all of this is not nearly so tied to biological gender today as it was a half century ago. The parity and economic independence of women has become a mitigating influence, to say the least.

Yet, as I said in the book review, I have to admit to a certain existential trap. In my case, at least, homosexuality developed as “upward affiliation,” after inability to compete well in boy things as a kid – and that could have a biological explanation. (It’s hard to tell; we didn’t have that kind of medicine in the 50s; everything was put in moral terms, even outside of religion.) But, by being attracted to “stronger” men, I am reinforcing the value of “masculinity.” That almost sounds like a contradiction. When it becomes public, it raises unsettling questions of motive and purpose for what thirty years ago was being argued as a private matter. I can also add, that if I can be expected to protect and provide for someone, I really would need the experience of creating my own lineage and having the benefit of society’s socially supported institutions, the emotionalism of which sometimes repels me.

In the film, Bobby is the perfect young man, except for one fatal, tragic last act. He has harmed no one. When you take out all the religion, it seems like the question is, does he do his part? In some lines of thinking, he wouldn’t. But I didn’t either.

I grew up in a social climate where "morality" was presumed to have a lot to do with the idea that one needed to heed the unseen sacrifices made by others. Unfortunately, we often neglected this aspect of our moral thinking when going across social classes and races, and then decided, sometimes in the 1970s, that it was too difficult to consider as a serious part of our own individual moral aspects. That does need to change.
Posted by Bill Boushka at 5:20 PM