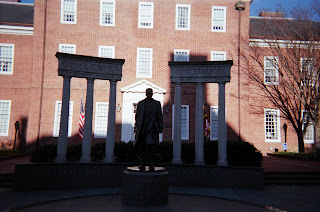 The Web Buyer’s Guide (from Ziff Davis), which first, like many companies, requests detailed registration information from “business people”, offers a brief 4-page PDF on social networking sites at work, from “Message Labs”, which is part of Symantec (associated with Norton anti-virus). The main link for acquiring the paper is here.

In fact, some companies, in some business environments, now expect their agents or associates to use social networking sites for corporate rather than strictly personal purposes, to “get business” and build referral lists. The Pew Internet group had reported this finding some time back. This eventual expectation of more traditional businesses probably was not clear to college students and young entrepreneurs from an individualistic geek culture when they invented these sites.

This particular paper does not hit “reputation defense” as hard as do many others.
Posted by Bill Boushka at 7:03 AM