Meta-talk on reporting about "moral hazard" 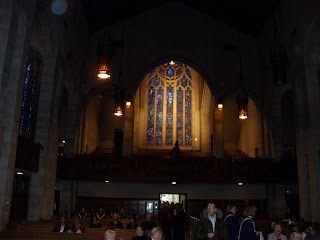 Recently (on Monday Dec. 15) I reviewed an ABC television report on the cast selection and rehearsal for a high school musical (not the same as the “Disney” one). The 20/20 report mentioned (with conversations from kids and parents) some edgy and perhaps “negative” aspects about the appearance of a few of the cast tryouts and finalists. I covered that in my review, partly in the context of the degree of “perfection” that the media expects from “professional” actors on stage, and in television and movies, some of are only slightly older than these kids. I wondered afterwards was it mean-spirited for a blogger to go into this? (I didn’t mention kids’ names for search engines; I did give some details about the school because, by happenstance, I had actually taught there once).

Well, after all, ABC 20/20 lit the kindling by covering this matter first. Perhaps if someone like me (whom the kids could know about) covers it, it could seem out of place, or a bit boorish to compare them to professionals. But, I review many major films and major television events on my blogs, and I treat the television events like this one as equivalent to “films”. So, if I’m going to give complete coverage as a journalist, I’ll mention it. And, as things stand now, amateur bloggers have the right to become and function as journalists, even if that idea stirs controversy.

I’ve covered my “philosophy” before of “connecting the dots” – as including the need to first show all the dots to connect! Then you get a balanced picture of the issues.

I can understand how this can come across, however. Postings “ad nauseum” deal with troubling news events that, when put together, suggest not only that the sky is falling, but that a lot of us are getting just what we deserve. Most of my articles are abstract or newsy or at least about issues; they don’t attack specific people. But they do question the idea that people should play victim. They do invoke ideas about “moral hazard.” Personally, I welcome any steps that can stabilize the economy, but I don’t think we can get away from the fact that we have been living beyond our means, and some of that is related, as in the previous post, to varying levels of family responsibility, not all of it voluntary.

But I can see that it would be problematic for many employers to find that someone they hired does this (collecting a record of all of our society’s presumptive “sins”) on the web. It isn’t a matter of “reputation defense” in the sense usually reported these days. It’s more about “sociability.” You wouldn’t want somebody selling loans at the suddenly reduced mortgage rates to be lecturing under his own name about the “immorality” of families living beyond their means. You’d want to find personal empathy.
Posted by Bill Boushka at 5:36 PM

I recently came across your blog and have been reading along. I thought I would leave my first comment. I don't know what to say except that I have enjoyed reading. Nice blog. I will keep visiting this blog very often.