Internet gambling, while largely illegal in the U.S., is a big controversy now 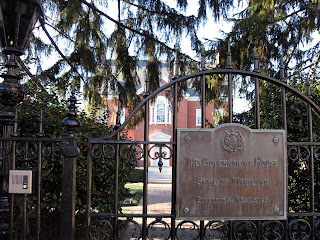 This week the Washington Post has run a series on Internet gambling, starting Sunday, but the most controversial story is probably the item that appeared on the front page Monday Dec. 1, by Gilbert Gaul, “Inside Bet: Should Internet Gambling Be Legal? Prohibition vs. Regulation Debated as U.S. Bettors Use Foreign Sites,” main link here. Gaul has a link there for a discussion of "participatory journalism" and his rejection of it (that would mean gambling to report on it -- a kind of undercover activity, rather like going to work covertly for a questionable employer in order to report on it).

The centerpiece of the article is the Unlawful Internet Gambling Enforcement Act of 2006 (Cornell law school link here). which is part of the Security and Accountability for Every Port Act of 2006. Essentially the law prohibits transfer of funds from any American financial institution to an Internet gambling set, but there are politically driven exceptions having to do with horse racing, online lotteries (sponsored by states) and fantasy sports. Recently, even in the midst of the financial crisis strapping banks, the Bush administration Treasury Department implemented new rules prohibiting banks from negotiating various kinds of financial transactions. It appears that, as a result of the law, almost all Internet gambling sites are hosted and operated overseas.

The prohibition is quite anti-libertarian, but the political motives are complicated. Much of it has to do with “protecting” legal casinos operated by Indian tribes in many states, and particularly the gaming business in places like Las Vegas and Atlantic City. Professional sports, such as the National Football League (NFL) have been heavy proponents of the bill, which they may see as necessary to prevent "fixing" of games. Some of the rationalization has to do with the federalist principle that states should be able to regulate gambling within their own boundaries. The mechanics of the law go back to the 1961 Interstate Wire Act passed during the Kennedy administration (link), which was conceived more as a way to control organized crime as it was at the time.

People say that the laws are necessary to protect adults who would be gambling addicts and to protect minors. Imagine, however, using such logic with adult content. (That’s what the litigation involving COPA, the Child Online Protection Act, was all about.)

Relatively few states go after actual individual home users of gambling sites (which has been reported to happen in Washington state). This is different from legal practice with other problems, like child pornography.

Although I created doaskdotell.com in 1999 (the domain named after my book), I originally kept most of my content on hppub.com (an acronym for High Productivity Publishing) after publishing my first book in 1997. In 2005, I moved all the content to doaskdotell and gave up hppub. Shortly thereafter, I found it was used by an international gaming site. I had to clean up all dangling links to it to prevent people from linking to it accidentally, but probably the name was used because of its previous association (through me) with “libertarian” ideas. In 2007 or early 2008, it seemed, the site disappeared. Curiously, it seems to be used now by an international clone of the Electronic Frontier Foundation, of which I am a member.
Posted by Bill Boushka at 9:12 AM