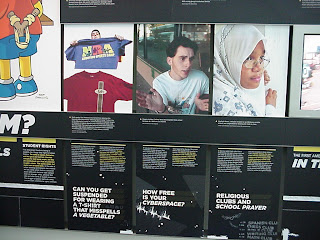 Here we go again. The NBC Today show reports this morning (Sunday Nov. 9) that about 10% of colleges and universities (or their admissions officers) check Facebook and Myspace profiles (and presumably other personal blogs) of applicants, some without informing applicants. This report comes from the Kaplan Test Prep and Admissions service in this press release, dated Sept. 18, 2008. The title of the story is "At top schools, one in ten college admissions officers visits applicants' social networking sites".

However Northwestern University told NBC that it considered a college’s doing so without informing students to be unethical. Many other colleges seem to agree. Many reports fail to note the risk that a college could pull a profile or blog for the wrong person and no one would ever know it. Colleges could, however, ask students to identify any profiles as part of the application process (and so could employers).

The general impression is that social networking activity is more likely to hurt students (give colleges a reason to reject them) than help them.

There could be other reasons to visit social networking sites besides reputation. They could be to check writing style, spelling and competence!

Employees of private businesses are protected by the right organize and engage in collective bargaining. But they are not necessarily protected by a supposed right to distribute their own speech publicly, which social networking sites and blogs do very effectively.

It is very interesting to see the enormous variety of perceptions about the First Amendment in our culture and how it tracks to an enormous range of opinion regarding personal reputation (including, now, online reputation). It would be an interesting project to compare free speech today to what the concept of the Founding Fathers was when they wrote the Bill of Rights, or what the colonists actually experienced before the Revolutionary War.

Kevin Tibbles provided the report.
Posted by Bill Boushka at 5:04 AM